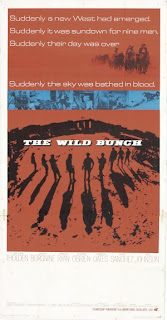 “The Wild Bunch” is violence. Every scene deals with the build-up to violence, the act itself or the immediate aftermath. It does not judge the violence it presents or the men at the film’s center. These men are not heroes, and though they would be considered villains in any other Western, since the film does not present us with any heroic characters, they are all we have to identify with.

William Holden plays Pike, the leader of the Bunch of the title, a group of outlaws who, for most of the movie, are attempting to steal and sell a stock of weapons (including a machine gun). Pike’s group is being shadowed by Robert Ryan’s Deke. Deke used to be a member of the group, but was caught and now much catch them to gain his freedom, otherwise he’ll be hanged. All this happens during an uncertain period in the American West, with the time of such outlaws coming to an end. At one point, one of the outlaws is dragged behind a modern car for hours. The metaphor isn’t subtle.

The film opens with one of the most astonishing action set-pieces I’ve ever seen. It’s a bank robbery orchestrated by Pike’s gang that turns out to be a set-up by Deke. Instead of playing it out like a chess game, everyone just starts blowing everyone else away. Dozens of bystanders in the town are murdered in the crossfire. Even the priest gets it. The blood and guts aren’t focused upon, instead quickly filmed and cut away from in order to create a mood of chaos, violence (of course) and destruction.

The movie never reaches this high again. From the set-piece, we know that the Wild Bunch are villains we really shouldn’t like (they kill women and children!) and that they are all going to be dead by the end of the movie. This isn’t the kind of film that would present such a gutsy opening and then redeem these guys—it simply informs us that it has set them on their path for death and we’re in for the ride. Another none-too-subtle metaphor: the first images of the movie are that of a group of scorpions being killed slowly by hundreds of fire ants.

The characters are well-developed considering that they are so unlikable. Instead of being characters we simply loathe, the gang are, for the most part, characters we find watchable, particularly Jaime Sanchez’s Angel, who tries to send a crate of guns to those rebelling against the warlord who has taken over his hometown (and the gang just happens to be in business with). Oddly enough, the least interesting characters in the group are the leads. I’m not even sure why Ernest Borgnine’s character was in the movie, and though Holden’s Pike is given flashbacks to pad his motivations and background, but they do little to turn him three-dimensional.

The most absorbing character in the movie is Ryan’s Deke, because he can’t have any motivations. He has to catch these men he’s worked with before, has to out-think them and has to ensure their deaths no matter how he feels about the whole thing. In any given scene, we’re never quite sure what he’s thinking or feeling, and that paradox makes him fascinating. One moment I missed from the movie is the group’s relationship to him. It’s implied Holden was his good friend, though something stated more explicitly in a movie where everything is stated explicitly and underlined for good measure would have been nice. Instead, they just treat him like a force of nature instead of a human being, which sounds cool when I type it but doesn’t work as well in execution.

Director/screenwriter Sam Peckinpah and his co-writer Walon Green seem to be intent on subverting as many Western genre conventions as possible, though in much more obvious ways than, say, “The Searchers.” The most obvious, already stated, is having the “heroes” be villains, but there are many others. Holden falls off his horse instead of mounting it like a pro. Many of the extra soldiers who are killed off are fifteen year old kids, not grizzled extras. Every woman in the movie is either a prostitute or canon fodder (or both).

The tone of the movie is somber and brooding (in other words, perfect for a Western), though there are two major shifts that come out of nowhere. The first is when a Mexican soldier repeatedly accidentally fires off a machine gun and almost kills dozens of people and the second is when it seems like an entire town is simultaneously laughing at a single person. Where did these moments come from and why weren’t they cut out?

In addition to the opening bank heist, there are two other big set-pieces. The first involves stealing a train out from under the nose of Deke, who just happens to be on one of the train cars. There’s some nifty direction and tension built here before the train starts moving, but instead of gaining momentum (sorry about the analogy) as it builds to its climax, the sequence peters out as the train speeds up.

The third is the everything-including-the-kitchen-sink climax, which involves the aforementioned machine gun and the deaths of what seems like hundreds of extras. It’s not quite on the scale of when Rambo killed an entire country, but it’s up there.

But what do these beautifully staged scenes and sequences add up to in a film where the audience has no emotional stakes in the story or the characters’ fates? Not all that much. I’m a sucker for a well-done action flick, and I was never bored watching “The Wild Bunch” and became involved in the major set-pieces, but more for the technical mastery than because I cared about what was going on. It’s obvious that Walon and Peckinpah meant to reinvent and subvert the Western genre by bringing realism (I use that as a relative term) and legitimate, consequential violence to the world of O.K. Corrals and Stagecoaches, and that they do. But perhaps they took it a step too far and cut off the audience’s emotional response in the process. There are great things in this film, but in the end it’s merely good.