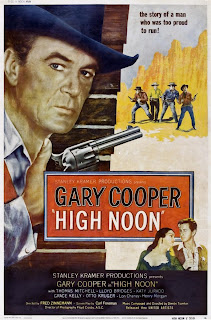 “High Noon” feels like a crackerjack sequel to a great Western. It involves a villain, long thought gone, being released from prison and returning to the small town he almost pulled into anarchy upon to exact his revenge. All of the characters speak of this man, Frank Miller (Ian MacDonald), in hushed tones wizards would reserve for the word “Voldemort.” We get the impression that the entire New Mexican town once united to defeat him, which makes the fact that no one will stand against him save for the lone marshal Kane (Gary Cooper) all the more devastating.

Perhaps I wrote “marshal” too soon, since we first see Kane getting married and turning in his tin law-enforcement tin star in order to go on his honeymoon. He won’t be returning to the job anytime soon, either. You see, his wife Amy (Grace Kelly) is a Quaker. The moment the townsfolk find out Miller is returning, they put Kane and Amy on a carriage out of town, but Kane can’t leave.

Kane makes some vague assertions that Miller will follow them wherever they go, but the Wild West was still awful big, and claims like that hold little water. It becomes readily apparent that the townsfolk are more than willing to step aside and allow Miller back into their lives. There’s no real reason for Kane to stand up like he does, except for the little fact that it’s what is right.

Screenwriter Carl Foreman does a great job of creating a real town, filled with people who have existed before the film began and will after the movie ends. One of the most interesting relationships is Kane’s former connection to a town “businesswoman” named Helen (Katy Jurado), who is now in a relationship with Kane’s former best friend Harvey (Lloyd Bridges). Harvey has always been jealous of Kane, and is the kind of man who can make any situation about him, no matter how inane the reasoning. He’s weak, and when Helen calls him out on this, he becomes even more blindly enraged at Kane. Ultimately, Kane and Harvey trade blows under the guise that Harvey wants to “rescue” him, but it’s really nothing more than a pissing contest Kane isn’t interested in participating in.

Also fascinating is the odd connection Amy shares with Helen. Amy suspects that Helen is the reason Kane isn’t leaving, and that couldn’t be farther from the truth. In their short conversation together, something “clicks” between them. The fact that Foreman developed this relationship at all is quite refreshing considering how women in Westerns traditionally get the shaft in characterization or storytelling.

While the story might not literally be a “ticking time bomb,” it’s just about as damn close as a movie can get. We learn early that Miller is coming in on the noon train, and from that moment that is all any of the characters can think about. Clocks are in almost every room, and when one isn’t handy a supporting character will helpfully report that “time is short!” Foreman crafts some outstanding moments out of this suspense, as when a members of a church want to debate, at length, exactly what the pros and cons are of standing up with Kane against Miller. The scene would be funny if it weren’t so sad, and that’s just the way Foreman and director Fred Zinnemann want it.

Though the screenplay is superbly structured and filled with absorbing moral quandaries, it’s not perfect. An early fight between Amy and Kane, moments after their wedding, feels more like something out of a bad ‘50s television show than one of the best films of all time. I feel that way about sprinkles of dialogue throughout the film—it’s not simplistic in a way that works for the characters but so direct that it causes a chuckle or a groan when it is supposed to work dramatically.

I have mixed feelings about the climactic chase sequence that occurs once Miller has arrived. It’s a little…blunt. The characters are too easily dispatched and I wish that there would have been a bigger cat-and-mouse element to the chase, rather than just shoot-out after shoot-out. I did, however, enjoy the way Zinnemann and Foreman involve Amy in the sequence, and like the way they underline what a hard decision it was for her because of her Quaker beliefs. It was a fine climax, but could have been much more.

Another problem with the finale is present throughout the rest of the film, and that’s the grating use of the song “Do Not Forsake Me O’ My Darlin’.” It’s a catchy-enough little ditty, but to have its melody play almost nonstop for the film’s last fifteen minutes could be annoying to even the most patient viewer. The patches of the song that are used earlier only take the viewer out of the movie instead of underlining what we’re seeing on screen, and that’s a shame.

Cooper and Kelly are great in their respective roles, with one major exception, and that is that I do not believe them as a married couple. Because they share so few scenes together in the movie, this isn’t a huge deal, but it would have been better if I was really rooting for them. It’s not that Cooper is way too old for Kelly, at least not fully (I still love Hepburn and Astaire in “Funny Face,” no matter how icky it is), but they simply don’t compliment each other as actors very well.

Despite my reservations, the final minute of the film is amazing. Seeing what seems like the entire town walk outside seconds after Miller falls dead to the ground to congratulate Kane, only to realize he doesn’t care anymore, is brimming with power, as is the moment he throws the tin star in the dirt. The filmmakers were brilliant in not dragging the moment down with lots of dialogue, simply letting the actors do their thing and pulling back the camera when the time came. The rest of “High Noon” doesn’t quite live up to that excellence, but it’s good enough that I wish they would have made a prequel.

Is this an original analysis, or did you find it somewhere else? It was interesting, thank you.