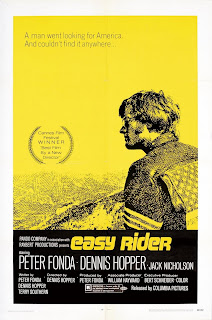 The magic of “Easy Rider” is the ease (not a pun, I promise) with which it observes and explores a moment in our culture’s uncertain history. For most of its running time, the film astounds with its restrained, straightforward observations of America. It’s such a shame that the movie spirals off-base in its final act with sudden, heavy-handed biblical references and incomprehensible plot developments.

The movie opens with Peter Fonda’s Captain America (he has an American flag sewn onto the back of his jacket) and Dennis Hopper’s Billy exchanging cocaine for a lot of money. They roll the money, stick it into a plastic hose and then slide the hose into the gas tank of Captain America’s (awesome) motorcycle. It’s one of the more ingenious ways to hide thousands of dollars, right up there with the stamps in “Charade” and the painting in “The Thomas Crown Affair” (and this is probably the only time these movies will be compared to “Easy Rider”). The duo get on top of their bikes and begin a cross country journey that will end at Mardi Gras.

Hopper (also the director and co-writer) sets the first scene of the film next to an airport landing strip, and any conversation the characters have is drowned out completely by the sound of landing planes. Though the moment is annoying itself because it just lasts too damn long, it alerts the audience to the fact that, for most of the movie, dialogue is unnecessary and mostly negligible when spoken. And yes, the first half hour of the movie has only a few lines of dialogue as far as I can remember, and what is said is superfluous. It might as well be a silent picture you watch while playing some of your favorite tunes, and I mean that as a huge compliment.

As a director, Hopper (with his co-writers Fonda and Terry Southern) is content to show us the story with simple, haunting images of the American landscape shot from mercifully empty roads with some fantastic classic rock songs playing on the soundtrack. The guys are just being guys, doing tricks on their cycles and contemplating deep things while looking forlornly at the horizon. On my way to Los Angeles I drove as much of Route 66 as is left drivable (which is probably less than half), and these scenes left me drooling and aching to get in my car and just start driving…it didn’t matter where. One could argue that this type of scene (the guys riding, breathtaking landscapes, rock and roll) is done much too much in the movie, but I couldn’t get enough of it. The repetitive nature of the moments made the film almost hypnotic.

The duo’s day in a commune (they are brought to it by a hitchhiker they pick up) is intriguing to see today…we watch the (almost entirely) young people desperately attempting to retreat to an innocent, back-to-the-basics lifestyle despite the weather and ground making it impossible to create a harvest. There’s an amazing 360 degree shot of the group circled for prayer and, as the camera slowly pans around, it makes the time to capture in every face in the circle and linger briefly. We have time to contemplate them, wonder how they got there and think about what their story might be.

We also wonder about Captain America and Billy, where they came from and how they got to know each other. They rarely speak to each other for more than a few lines, but then again, they don’t really need to. They work as non-characters—better at representing us as observers than themselves. Both are very good actors, but you won’t get that from this movie—the performances are almost nonexistent.

We are introduced to a slimy lawyer George (Jack Nicholson) when the two are arrested for riding in a parade without a permit. George joins them on their trek to Mardi Gras and there’s a beautiful image of George in a football helmet on the back of the motorcycle. There’s also a sweet scene of Captain America gently explaining to George how to smoke pot. While most of the movie would work as a silent movie, George’s hypothesis on how aliens have already invaded and are working amongst us must be heard to be believed.

Suddenly George dies, and the movie goes off the rails. He’s murdered by a bunch of thugs who mock and berate the trio in a diner (the scene works wonderfully at getting under the viewer’s skin and making him uncomfortable), and then is barely spoken of again. Captain America and Billy say he would have wanted them to finish their trek (instead of, you know, being taken to a mortuary and sent home to be buried), and they do just that. Wait…what?

And then Captain America turns into Jesus.

The metaphor is horrendous, ham-fisted and completely out of line with the rest of the movie that has led up to it. He, Billy and two hookers (one of which is Karen Black) have a really bad trip in New Orleans and we even hear church music playing loudly. There’s a scene where Captain America doesn’t quite say “This is my body, this is my blood,” but he might as well have.

By the time we reach the contrived, cringe-inducing ending that has both our leads killed off by a passing truck, the metaphor has gotten so heavy-handed you can’t help but roll your eyes.

Why couldn’t the movie have just kept observing? It could have gotten the same point across in a more subtle manner by making the diner scene the finale. We get that these men will never be accepted into normal society, we don’t need them literally blown away to underline that.

Many of the images and moments, mostly the smaller ones, linger beautifully after the film ends. This movie doesn’t ask us to swallow easy answers to life’s questions or judge those who are quickly judged. Despite its third-act implosion, I can’t help but love the trip.