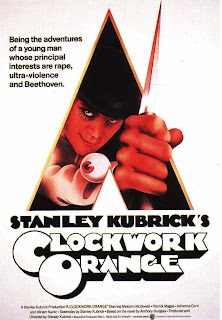 To me, the definition of “art,” whatever its medium, is the ability to create an emotional reaction the person experiencing it. Laughter, tears, empathy, sympathy, love, hate…whatever the reaction might be, if a piece of art creates some reaction, it is valuable. I’ve immensely disliked some of the movies on AFI’s top 100 list (“Who’s Afraid of Virginia Woolf?”, “Sullivan’s Travels”), but there was still much in those movies that caused an emotional response from me, even if I disagreed with it.

The film begins with the rapist/psychopath/murderer/other-evil-stuffer Alex (Malcolm McDowell) and his buddies at a milk bar. They are soon beating up a homeless man in the cleanest alley ever and then break into a couple’s house, cripple the husband and rape the wife. On another night, Alex is caught after murdering another woman and sentenced to prison, where he is entered into a mental rehabilitation program and “programmed” to respond to rape, violence and Beethoven with immediately sickness. He’s released.

But his family doesn’t want him and, after bloody encounters with some of his former gang members and the homeless man he beat up at the beginning of the movie, he arrives on the familiar doorstep of the family who he beat and raped. The woman is dead now, unable to cope with her rape, and the man is wheelchair-bound. Then the film turns into “The Virgin Spring” for a reel or two, but with a bodybuilder and Gene Kelley impersonations.

I must say that there are very good things in the movie. The film is a technical marvel, like all of writer/producer/director Kubrick’s work. The first shot, which begins as a close-up on Alex’s dead, staring eyes (he’s not dead, just his soul and eyes) and the slow pull back of the camera, is a fantastic way to begin the movie. There are also moments of real wit, like the fast-forwarded sequence of Alex bedding two women whilst “The Lone Ranger” theme plays on the soundtrack. And yes, McDowell is very convincing as Alex, conveying a real psychosis sitting just beneath the surface of his charming demeanor. Oh, and that eye-holder-thingie is very creepy.

But then there’s everything else.

Yes, of course the rape scenes were disturbing, as any such scene would be. But really, there’s no emotional undertones for the rape scenes or…well…any other scene in the movie. Are we supposed to feel bad for Alex after the reconditioning (which he volunteered for) and that he’s being tortured by those from his past? Are we supposed to feel a swell of pride and happiness when he beats his mental blocks in the final sequence? He’s a rapist and killer. It’s impossible to feel any sort of identification with him.

Kubrick is obviously asking us to explore our feelings on good and evil, the lines therein and the areas of grey where the “good” guys are really in Hitler outfits and torture the bad guys. Or something like that. It supposed to be deep, right? If I want a deep examination of this type of material, I’ll rewatch the aforementioned “The Virgin Spring,” thankyouverymuch. Or, hell, even “The Last House On the Left” remake. I remember feeling very much for Monica Potter in that. Really.

So what’s left? The subversive comedy, I guess. But it’s more tongue-in-cheek than anything else and isn’t funny enough to make the movie entertaining.

I’ve already mentioned McDowell, but the rest of the acting in the film is either robotic or completely over the top. Psychotically over the top, in fact, which suits the movie, I guess.

A lot of this must have been very controversial back in the day. Today, this kind of sexual violence happens on “Private Practice,” but without the exposed breasts. I can get better political satire on “The Daily Show” or in any given issue of “The New Yorker.” Other “hugely controversial” films and television still hold up because their underlying stories and characters were engaging and interesting. Here we’ve got a lot of well-shot violence and…what else? I'm guessing that, much like the films "American Psycho" and "Fight Club," much of the audience "gets" that it is supposed to be parody, but a certain sect of the movie's superfans support the film for what it blatantly states and not what is between the lines. I don't write that as a criticism, just as an observation.

Oh, and can someone please explain to me what exactly “A Clockwork Orange” is supposed to mean? Anyone? Bueller?

So how to rate the movie? No movie with this type of technical mastery can really be a bust. I’ll remember certain scenes and shots from the movie after everything else has faded simply because they were so pretty to look at. McDowell is certainly a good psychopath. And yet I kept asking myself over and over…”so what?” In it’s own way, the movie is unclassifiable and exists on its own spectrum.

So I guess I’ll give the movie two stars and throw up my hands.

You write all this and give the movie two stars? for shame, for shame. It's obvious from what you wrote that the movie instilled what you originally spoke about, a wide range of emotions and or reactions; yet your final opinion is that it wasn't worth anything more than two stars? :(