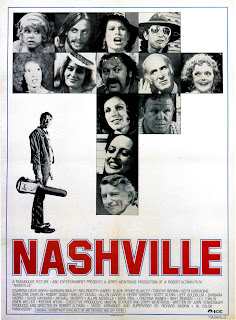 I guess I just wasn’t ready for a Robert Altman movie. I was 16 and my first encounter with the filmmaker was “Gosford Park.” I didn’t know anything about Altman, all I knew was that it was a murder mystery…and since I’m a huge Agatha Christie fan I was very much anticipating the film. All I remember is that I hated (HATED) it, and in retrospect that’s probably because the style of Christie’s novels and Altman’s films could not be more different. Because my expectations were so skewed, there was no way I could have accepted the film for what it was.

I didn’t see another Altman movie for the next decade.

Therefore, it’s not a coincidence that I’ve written articles on almost 70 movies from the AFI Top 100 list before I tackled the first Altman movie. But now here I sit, completely in awe of what Altman and writer Joan Tewkesbury have accomplished with “Nashville” and eager to dive into his films and see just what I’ve been missing. Hell, “Nashville” was so damn good I might even give “Gosford Park” a second chance.

The film has a huge ensemble of at least 20 major characters, but other than that, it’s hard to put a finger on what the movie is “about.” There’s plenty of music, but this isn’t a “musical.” There are love stories, but this isn’t a “romance.” It’s funny but not a “comedy.” It has political undertones, but it isn’t a “message” movie. Tewkesbury refuses to give the viewer an easy answer, instead focusing on making the characters as three-dimensional as possible given the huge cast and time constraints (the movie is really long at over two-and-a-half hours, but doesn’t feel that way).

And there are some fantastic, memorable characters at play here. I doubt if Lily Tomlin is onscreen more than 20 minutes in the movie, but in that time she creates a fully-realized woman that the audience falls for. It would have been easy to make her “the pushover mother with deaf children,” but there’s much more to her. There’s a beautiful moment where she goes to a club to listen to the young, handsome singer (Keith Carradine) who invited her, and Altman’s camera just watches her as she (and, by extension, the audience) contemplates how to feel about the singer.

Tomlin’s character is only the first of a great many, and one of the gifts of “Nashville” is that many of the characters may appear to be shallow at first but end up surprising the audience with their depth and appeal. There’s a man named Haven Hamilton (Henry Gibson), and I’m guessing Haven isn’t his birth name, who seems like your classic stuck-up asshole country star, but after a tragic shooting at a large musical event, he’s the first to spring into action and calm the crowd before it takes on a stampede mentality and people get hurt. Oh, and he does this while his arm is bleeding from being shot.

Then there’s the much-loved Barbara Jean (Ronee Blakley), who is the picture of a wonderful, loving songstress when surrounded by fans but, when alone, reveals her fears and anger toward her sad-sack husband (Allen Garfield). There’s a heartbreaking moment where she takes the stage after getting out of the hospital and can’t bring herself to sing because she wants to talk to the audience…something she never gets a chance to honestly do in her marriage. I’m guessing Shana Feste was taking a lot of notes and inspiration from this storyline in particular when she made the sort-of-good “Country Strong” last year, because many of these scenes are echoed beat-for-beat there.

Tewkesbury and Altman throw in dozens of small beats and moments that make the characters feel like people, and a lot of that comes from now natural the dialogue feels. I’ve only seen that one Altman film, but every person familiar with film at all knows that he’s famous for allowing his actors to speak over one another and talk like real people would. Barbara Baxley is given a long speech about the Kennedys (that foreshadows the shooting), and in most other movies it would seem theatrical and contrived, but here Baxley’s dialogue is so natural, and the word choice so honest that everything she says feels fresh.

In such a fantastic ensemble, two characters stick out like sore thumbs. The first is a BBC reporter (Geraldine Chaplin) who is so wrong-headed in everything she observes and the way she speaks to every character that she is immediately grating. Every time she gets onscreen, I cringed and rolled my eyes at most of her lines. There’s no moment where she becomes the real person much of the rest of the cast does, and as a result she’s nothing more than bad comedy. Speaking of bad comedy, there’s also Shelly Duvall as the most grating young woman I’ve ever seen, from her hair to her costuming to…well…everything about her. I know these characters are supposed to be annoying, but in a movie where a character like Haven can show such unexpected depth, this was a real missed opportunity.

The music throughout is very good, with a few standout performances from actors like Karen Black and Carradine, who sings my favorite song in the film, “I’m Easy,” in the aforementioned club scene with Tomlin. Because the movie is about so much, with so many characters and tonal shifts, the music is what keeps us consistently engaged. We see just about every style of country and gospel music, and therefore know that the types of stories we are watching will have that same type of variety.

What comes through more than anything else is the creators’ love for Nashville itself. Sure, Tewkesbury and Altman poke fun at aspects of the culture, but there’s a kind of love and admiration here that you rarely get from such epic films. From the traffic pile-up that turns into an impromptu party to Haven’s climactic declaration that “This is Nashville, not Dallas!”, this movie is a pleasure that makes me want to be part of the world. More than anything, “Nashville” has also helped open my eyes to a brilliant filmmaker I may have ignored, and isn’t that part of the point of the AFI Top 100? It’s “ranking” the movies, yes, but it also invites those who love film to open up new avenues in their viewing, and I’m very grateful for that.