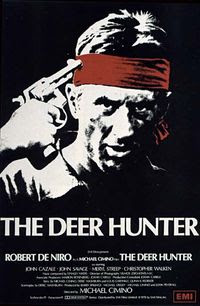 “The Deer Hunter” has some good things in it, but the overall effect I got out of it was indifference. When I realized that the three act structure of the film would follow a character named Michael (Robert De Niro) before his tour in the Vietnam, during the tour and then the emotional aftermath when he returns home, I thought it was refreshing and couldn’t wait to dive in. Then, as the movie rolled on (and on (and on))) I began to realize that the film’s messages (the ones that came out when it wasn’t trying to be overly ambiguous) were nothing we hadn’t seen told better in other films. Ultimately, the movie feels ambitious, but in the sense that it’s overindulgent, overlong and overcooked.

The film’s first act mostly focuses on a Russian Orthodox wedding attended by Michael, his best friend Nick (Christopher Walken), the woman they both love (Meryl Streep), the groom (John Savage) and assorted drunken people. And yes, for awhile it’s very enjoyable to get such a slice of small-town life and see the joy and exhilaration of the celebration. But twenty minutes would have been fine…instead we’ve got another thirty to watch.

The main male cast are drunk for the first hour and ten minutes of the movie. I wish I was exaggerating, but I’m not. Writer Deric Washburn and director Michael Cimino try give us one of those “this is how men really behave” feelings here. But let’s be honest with ourselves, guys. This isn’t how dudes really act when they are drunk. The actions we see here and the guys’ behavior is how men wish we could act while they are drunk. Here the characters have deep, logical, insightful conversations with one another, can drive wonderfully under the influence, go hunting and actually see well enough to shoot a deer, shower each other with beer on a pool table and perfectly play the piano. In reality, these characters would probably burp, pee in the corner of a room and then pass out on the couch.

The film picks up immensely once the men get to Vietnam, reaching its high point with an incredibly tense Russian Roulette sequence and nail-biting escape and rescue. Cimino does an excellent job of staging the Russian Roulette game, surprising us by having the gun go off in shot angles we would not normally expect. And yet, even here I have reservations about how to story tackles the subject. In the first place, none of the main men die here. Yes, I know what happens to Nick later, but still, the scene would have been more powerful had one of the main characters actually shot himself here. And, in many ways, it would actually serve to further underline Nick’s PTSD and psychosis in the third act. The only characters that die are faceless characters. The movie also goes out of its way to not characterize any of the Vietnamese people, whatever side they are on. In “Platoon” this worked because they seemed more like a force…more like ghosts, but here the creators had every opportunity to take a few moments to give a little depth to them and avoided it. It’s a missed opportunity.

When the Michael character gets home, the movie slows down and acts like it’s giving us real insight into its characters and their situations. But just about everything every character does here is expected and pretty predictable. Of course Michael isn’t going to want a welcome home party. And of course he’s going to be emotionally distant from Streep’s character, who of course will latch onto him not only because she loves him, but because he is a connection to the other man she loves. And we know Michael is ultimately going to go back to get Nick, but he will not be successful.

I feel like, despite my complaints, there is insight here and there are very deep, well-acted scenes. It’s just that I’ve just seen much better interpretations of the subject matter than here. For example, “The Best Years Of Our Lives” done two generations before about WWII, is much more emotionally shattering and intuitive in its portrayal of the men coming home from the war, scarred both emotionally and physically. And for all the suspense and horror of the Russian Roulette scenes, “Platoon” is so much better at showing the real terror and uncertainty of the Vietnam war. And hell, if I want to see a bunch of guys under the influence and scared about going to war, I’ll watch “Hair.” It has a better soundtrack.

More than that, this is the first time I’ve been watching a movie on the AFI Top 100 and thought “well, the critics must have loved this.” Today it’s business as usual for studios to release films (“The Reader”) that seem tailor-made (“A Beautiful Mind”) to be nominated (“Million Dollar Baby”) for a bunch of Oscars (“The King’s Speech”), even though the content (“The Queen”) of the movies themselves (“Babel”) may not merit the attention (“The Curious Case of Benjamin Button”) they receive. That’s how I felt watching “The Deer Hunter.” Ooh, there’s the scene they shot for Streep’s Oscar reel! Oh look, an ambiguous ending that is bittersweet! Oh look, guys crying!

Look, I understand what Cimino was trying to accomplish here and I have a lot respect for what he did pull off. “The Deer Hunter” isn’t a bad movie, but it doesn’t work nearly as well as it could. It’s obvious and heavy-handed when it could have been subtle and impactful. It could have used a meat cleaver to chop off 45 minutes of fat. Sure, there were parts that were touching, and the performances of the leads are very good, but I also must say that I probably won’t remember most of the movie next month.