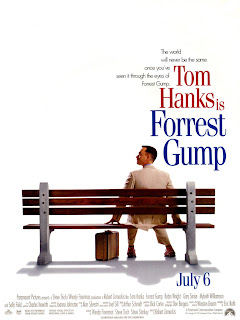 There’s no way that “Forrest Gump” should work. If you told me to watch a heartwarming movie about a “simple” man who manages to be involved with almost every major event in American history from the 50s to the 80s and, in the process, reveal many of the underlying truths in our culture, I would have probably laughed in your face. And yet, here I sit, greatly admiring screenwriter Eric Roth and director Robert Zemeckis’ sprawling epic.

Perhaps one of the secrets of the movie is that it doesn’t frontload its political and moral messages. Instead, screenwriter Eric Roth engrains several simple, t-shirt-ready universal truths into the character of Forrest (played wonderfully by Tom Hanks), often from the lips of his beloved Mama (Sally Field), and repeats them often (“Stupid is as stupid Does,” “Life is like a box of chocolates, you never know what you’re gonna get.”). Through those simple phrases we get perspective on defining American events, and a surprising insight.

Over the course of the movie, Forrest involves himself in the Vietnam War, begins the Watergate scandal, is one of the first investors in Apple Computers, almost becomes a member of the Black Panthers, helps to re-open American political relations to China and inspires John Lennon’s “Imagine.” I’m only scratching the surface here, there’s plenty more he gets himself mixed up in, mostly in quirky, original, memorable ways. Miracles happen early and often in Forrest’s life, beginning with the moment that he is running from bullies and his leg braces fall off. Instead of hobbling Forrest, when they fall off they free him, and he finds he can run faster than almost anyone else. Perhaps more miracles happen to him because he has a simpler mind and bigger heart than most, or maybe it’s because he’s smart enough to recognize them as miracles instead of just luck.

Just reading that last sentence misrepresents the movie as corny, oversweetened dreck, but it’s really not. There’s plenty of dark content here, thanks to Forrest’s true love and his best friend. We like Jenny (played by Robin Wright as an adult) almost immediately upon meeting her, thanks to the fact that she’s the only person who will give Forrest the time of day. There’s a beautiful scene early on where Jenny and Forrest run into her drunk, pedophile father’s fields to hide from him and she wishes to be turned into a bird. Roth revisits that moment twice later, first when the adult Jenny breaks down when she sees the house again for the first time in decades and later when Forrest has the house demolished, and each time it’s powerful.

Though Forrest remains slow and steady in his beliefs throughout his life, Jenny’s journey is really one of uncertainty and self-hate. She sleeps with a bunch of abusive losers and does a lot of drugs. In one scene she screams at Forrest, “You don’t even know what love is!” and at this moment she is, at best, a stripper. And that isn’t even her low point.

Forrest’s best friend is Lieutenant Dan (Gary Sinise), who he meets in Vietnam. Dan is bright and cheerful at first, but hates Forrest (and himself (and God (and everything else))) after Forrest rescues him from enemy bombing and he loses both of his legs. And yet it’s obvious he’s a good man, and at one point gets almost violently defensive when someone calls Forrest stupid. Sinise is one of the best character actors we have today, capable of revealing so much without seeming to do much at all, and this is one of his finest performances.

In fact, I’m not exaggerating when I say that all of the performances here are aces. All the actors, from Fields to Hanks to Wright, understand the tone of the material and go for it. Director Zemeckis is a brilliant director because he understands the technical side of the medium as well as the human, storytelling side. He’s also a great chameleon, giving us great diversity in his movies (“Contact,” “What Lies Beneath,” “Who Framed Roger Rabbit?” “Back to the Future” “Romancing the Stone”) but remaining distinguished as a filmmaker. Watching the above films, you can always tell it’s Zemeckis behind the camera. Recently he’s focused solely on completely CGI films like “Beowulf” and “A Christmas Carol.” I really wish he’ll return to live action soon, because an industry more concerned with 3-D and Transformers than story and substance needs him. Badly.

However, for as much works in the film, there are several things, both major and minor, which don’t. A small example is the random flashbacks to the actors as their ancestors (for example, we see Hanks as the head of the Ku Klux Klan and several generations of Sinise dying in battle. And for all the historical moments that are just right (Watergate), Forrest’s coining of the phrase “Shit Happens” and accidental creation of the smiley face t-shirt are badly done. Another problem is the shifts in character point-of-view that happen throughout and annoy, especially since it’s Forrest relating his own story in a voiceover is that is very omnipresent. James Cameron got away with shifting points-of-view in “Titanic” because he didn’t overdo the voice-over. Not so here. When the story shifts to Jenny snorting cocaine or contemplating suicide or, in general, breaking through the bottom of the barrel to find new lows, the film grinds to a halt.

Despite these new lows, we like Jenny and what an enigma she represents for Forrest…at least until the film’s last act. Here is where Roth’s screenplay goes off the rails and he begins to forcefully extract tears from the audience instead of allowing the story to crescendo into something transcendent. It turns out that Jenny has given birth to Forrest’s child and hidden the child from him for years. Why? No reason is given. And the only reason she’s bringing Forrest into the picture now is because she’s dying of AIDS. Suddenly, any sympathy I had for Jenny is gone. The introduction of the son is the only moment we see Hanks’ astounding performance falter a bit. Roth ignores an amazing opportunity to actually show Forrest become angry about something (a thing he has every right to be given the Lifetime-movie-of-the-week circumstances), and has Forrest immediately accept the situation and marry Jenny. The final moments of the movie show Forrest and his son waiting at the bus stop for Little Forrest’s first day of school, and it’s very charming, but it’s not earned.

In many ways, Roth took a second stab at this movie with “The Curious Case of Benjamin Button,” and I’m shocked he had no qualms about ripping himself off so freely. The results were horrible.

There are so many great things about “Forrest Gump,” and it almost reaches masterpiece status. If only it didn’t rely so much on bringing false tears to the audience. For a movie that is so honest and true for most of its running time, the tricks it tries to play on us in its final reels feels like biting into that gross piece of chocolate toffee cream at the back of a chocolate box.