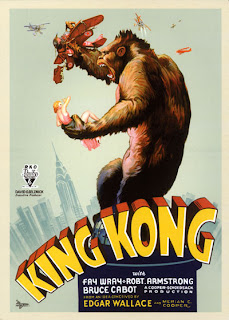 In comparison to the special effects of today, the effects that bring King Kong and his world to life are rudimentary, and yet they still work better than many modern visual effects. Viewing Kong, the dinosaurs and how they interact with the human cast is fascinating, and you get a charge out of watching the hair on Kong’s back alter with each frame or seeing Kong throw something on what is obviously a projection screen only to have a real prop land on an actor running for his life. Seeing how the special effects wizards went all out to bring the giant ape to life and utilizing every trick available to them at the time is great fun. Yes, Kong still works.

But the movie does not.

It takes almost forty-five minutes for Kong to make his first appearance, and up until that point, watching “King Kong” is like having several teeth pulled without anesthetic. The acting of the three leads and the supporting cast seems about on par with that of a PRC film around tax time and the script seems to have been cobbled together by two writers who don’t speak English and are trying to create dialogue from a translation dictionary with several pages missing. And the less said about the racist portrayal of the black islanders (complete with coconut bras for the women) the better.

Obviously, the filmmakers were completely investing all of their time and energy into delivering a crackerjack Kong to viewers, but then why did they make us wade through endless patches of connect-the-dots storytelling, gigantic plot holes and sleep-inducing characterization? We meet eccentric (i.e. psychotic) film director Carl Denham (Robert Armstrong), who picks up poor, distraught Anne (Fay Wray) off the street and invites her to star in his next film. The catch is that she has to board a steamer ship that night, and of course she does. She meets Armstrong’s right hand man Driscoll (Bruce Cabot), a character so wooden if you threw darts at him all he would do is tell you how many points you got with the shot. They fall immediately, disgustingly, in love and then the crew reaches an island not on any map except the one Denham magically has found. There’s a lost tribe on the island who guard a huge wall with a big door that leads into the kingdom of Kong.

While waiting for that damn big door to open we get lines like the following:

Anne: How will we know it’s the right island?
Denham: The mountain looks like a skull.
Anne: Oh, I’d forgotten, you had told me. Skull mountain.

Anne: Anybody would think I’ve been a lot of trouble. Well I haven’t. I haven’t been a bit of trouble to anyone. Have I?
Driscoll: Sure you have.
Anne: How?
Driscoll: Just being around is trouble.
Anne: Oh dear, and I thought everything was going so nicely.
Driscoll: Oh, you are alright. Women just can’t help being a bother. Made that way I guess.
Anne: Well, anyhow…

If feminism had existed in 1933, Anne’s character would have set it back thirty years. In fact, this role might have prevented it happening for thirty years. Then she (of course) falls for Driscoll, who has done nothing but insult her the entire journey. I’d rather not think about the scene where they declare their love for one another, but I will say that it’s akin to watching two store mannequins being pressed up against one another.

The odd thing is that I know Fay Wray can act. I recently saw the 1932 film “The Most Dangerous Game,” which stars Wray as a resourceful, interesting heroine in a situation very similar to the one she finds herself in during “King Kong.” As an actress, she does quite well and holds her own in every scene. In “Kong,” all she does is scream.

Every time Anne sees Kong, she screams. This is troubling since she spends most of the second and third act of the film with Kong. At one point, when someone just says the word “Kong” she screams. Later, we hear screams on the soundtrack even though we can plainly see that Wray’s mouth is closed. Whoops. Perhaps the sound designers and editors realizes that, years after they completed the movie, it would be a great drinking game. You’d think at some point perhaps Anne would realize that if she just stopped screaming then perhaps a) all these monsters would stop finding her and attacking her and b) she could quietly slip away from Kong.

Ah well, what’s logic in this film? If I bring logic into the mix, then I’d have to ask why those villagers spent all that time building a wall to keep Kong out and then decided to put a door in the wall. Or why Denham didn’t bring any other cast on his epic film shoot. Or how he got that map. Or why he has no fallout for basically getting a dozen men killed. Or how…but stop me before I get started.

Denham, not Kong, is the villain of the film. He single-mindedly drives two dozen innocent lives into horrible danger by taking them to skull island. Then dozens of deaths in New York by bringing Kong home with him. The fact that he gets no punishment (morally or physically) in the film is shocking, almost as shocking as the fact that “King Kong” eagerly brushes away these sins with a wave of its hand. Denham is portrayed as one of the film’s heroes. Why? No idea.

The movie gets better once the crew gets to Skull Island and Kong is introduced. The pace quickens immensely and its easier to ignore the plot inconsistencies and horrible acting (save for Wray’s screams) because everything is just moving too fast to notice. There are actually (shockingly) several moments with Kong that work on a deeper level than one would expect. I’m thinking of the smaller moments, like where Kong playfully undresses Anne then rubs her and smells his finger. Or the moment where Kong grabs a sleeping woman from her bed, realizes it is not Anne and send her falling dozens of stories to her death.

In fact, the carnage and cold-heartedness of Kong’s actions are the best part of the movie. Seeing Kong bust his way through the village, stepping on villagers and casually biting others in half is still rather shocking, as is the moment mentioned above and when Kong attacks a subway car. His battles with the other inhabitants of Skull Island (before they get repetitive) are quite engaging because they are very, very violent (Kong kills an Allosaurus by pulling its jaw open until it breaks apart). I’m not saying I like the violence, but it made me react to it, which is more than could be said for the rest of the movie.

Monster movies are one of the most interesting sub-sects of cinema because their monsters are more memorable than their heroes. Films like “The Bride of Frankenstein” and “The Black Cat” understand this and have fun by trying to blur the lines between hero and villain. “King Kong” had every chance to embrace that by making Denham the true villain of the piece. But it does not, and as a result we have a three-dimensional giant ape chasing cardboard cutouts. What a pity.