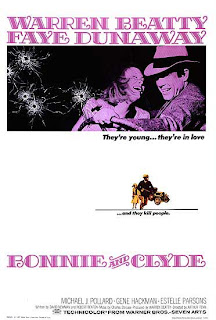 “Bonnie and Clyde” bears a striking similarity to 1967’s other killers-on-the-loose saga, “In Cold Blood.” Both were based on true stories and featured two none-too-bright murderers on the run from the law. We don’t sympathize with either duo of killers and both end with the main characters paying for their crimes with their lives. But where “In Cold Blood,” shot in stark black-and-white in a time when color was the norm, embraces the grittiness and realism of its story, “Bonnie and Clyde” romanticizes everything about its journey, from the first meeting of its characters to their final moments.

Our first encounters with the main characters sums them up perfectly. We first see Bonnie (Faye Dunaway) naked in her room at the height of her beauty and sexuality, but unable to feel satisfied in her existence. She meets Clyde (Warren Beatty), who may or may not be about to steal her Mother’s car, and doggedly pursues him until he shows her his gun. Literally. He holds the gun low, over his crotch, and Bonnie playfully grabs the pistol.

Clyde is impotent and director Arthur Penn’s placement of his gun is only the first of several none-too-subtle metaphors about the adrenaline rush of robbery and murder being the only way to get his rocks off. Later in the film, Bonnie desperately tries to get him to have sex with her, and when he cannot perform adequately, Bonnie reaches over to the gun (which magically appears on the bed) and begins to lovingly stroke it once more. Seriously.

They’ve robbed their first bank within the first ten minutes of the film. Bonnie pretends to put up a fight after the fact (more because Clyde refuses to have sex with her immediately after the robbery than because of the crime itself), but it hardly takes any convincing to get her back in the getaway car. Neither character could ever be defined as smart, and if not for the robbing and murdering, neither would be interesting enough to hold a conversation of more than a few seconds with.

Together they form a gang after picking up a gas station attendant named C.W. (Michael J. Pollard) who is savvy with cars, but not much else, and then bring onboard Clyde’s brother (Gene Hackman) and sister-in-law (Estelle Parsons). All the people in the Barrow Gang are insufferable to one point or another, but as annoying as it is to watch these unlikable characters interact with one another, there is also something hypnotic about the experience of watching them annoy one another. There might be five people in the getaway car at any given time, but “Bonnie and Clyde” soon proves itself to be a meditation about human loneliness.

Parsons’ character doesn’t want to be involved at all in the robberies and makes the fact known as often as possible (and that’s very, very often). But, as long as she’s there, she thinks she should get a share anyway. Hackman’s character is torn between loyalty to his wife and loyalty to his brother and never can make anyone happy. There’s an interesting beat between Hackman and Beatty right after their reunion where they try to communicate with each other about their women and the robberies, and neither really has anything to say except half-truths and sickening boasts. C.W. is just too dim to understand what’s going on around him. And the title characters are definitely in whatever definition of love they have for themselves, but neither can fulfill the other’s needs, emotionally or sexually.

It’s not as if they don’t try to get along. Bonnie reaches her emotional breaking point one night (she can’t stand Parsons and I don’t blame her. I blame her character for many things, but not that) and runs away. Clyde finds her running through a corn field (the shot of Beatty pursuing Dunaway into the field is phenomenal thanks to a happy mistake of nature which sees the field being draped in shadows because a cloud covered the sun) and she begs to see her Mother. Clyde takes her back to her family, but Bonnie’s mother is not impressed with Clyde’s charms or their assurance that they’ll come back and live near her.

Serving as the backdrop to all of this is, of course, the robberies and murder. The gang is barely capable of bathing themselves in the morning, so many of the robberies are horribly calculated (at one point they attempt to rob a bank that has been out of business for weeks). But Penn makes the sequences a visual feast, never moreso than the moments leading up to Clyde’s first murder. C.W. has, for reasons known only to him, parallel parked the getaway car during the robbery and as he tries to get the car out of town they almost hit several other cars in a crowded street. Finally an old man jumps on the getaway car and Clyde shoots him in the face through the window. The window glass cracks in a morbidly beautiful way and the man’s eyes glaze. It’s an indelible, unforgettable moment in the movie.

Which, of course, is the entire point of the movie. Even the murders are lovely. It glamorizes every part of these unlikable characters’ lives to the point where Bonnie actually writes poetry about her time on the run and submits it to newspapers across the country. Dunaway and Beatty had quite a tightrope to walk. Both are almost too pretty, and that could easily work against the movie, but both actors saw that as an opportunity to embrace the more annoying characteristics of the characters since they knew the audience would forgive a pretty person longer than a less-than-pretty person. Sad, but true. Even their deaths are romanticized, with the characters writhing sexually as they are riddled with dozens of bullets.

“Bonnie and Clyde” is a movie I respect more than like. “In cold Blood” goes out of its to show no romanticism or beauty in its wickedness, and oddly enough develops a soul somewhere along the way. Here, I appreciate the great pains the filmmakers took to glamorize sex and violence while still making the main characters unlikable, but that ultimately means the movie is a beautiful, hollow piece of art.

"I respect more than I like" sums up my feelings about just about all of the movies in the Top 100. I guess they just don't suit my tastes. I haven't seen this one since college, but I remember liking it. Nice break from all the cinema verite they shoved down our throats.