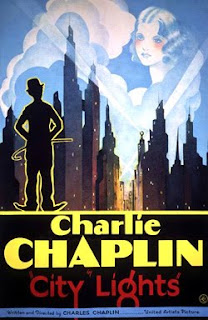 Were any of the characters in “City Lights” to speak, even a word or two, the movie would implode. The film is a celebration of humanity and the triumph of love over cynicism—those emotions that make so much sense when we feel them but become so convoluted and skeptical when spoken aloud. The film allows itself to be unabashedly sentimental and is smart enough to know that we all are as well, but refuse to admit it and mock sentimentality whenever possible. Here the Tramp character (Chaplin, of course) is so brave and so willing to sacrifice everything for the woman he loves that it is impossible not to fall for the film. Dialogue would have destroyed that.

Unsurprisingly, Hollywood has become so in love with its own voice that it has allowed needless dialogue to destroy so many almost-perfect moments in almost-great films. Look at the finale to “The Notebook,” which is heartbreaking until the characters open their mouths about “miracles.” Or “Dead Man Walking,” where Matthew feels the need to apologize. And what filmmaker doesn’t have their own Web site, blog (whoops) or blathers on during film commentary instead of letting the work speak for itself?

Chaplin (also the writer/director) opens “City Lights” mocking dialogue by having several politicians speak, but all we can hear is squawking. The moment must have been funny when the film was first released, but the moment has inspired (or has been ripped-off in, whichever fits your fancy) so many other films and television (most memorably the adults in the “Peanuts” cartoons) that it has lost all its power. Immediately following this is one of Chaplin’s rare comedic misfires, as we find the Tramp asleep in the arms of a statue and attempting (unsuccessfully) to climb his way down.

But from the moment the Tramp encounters a poor blind Girl (Virginia Cherrill) who supports her elderly Grandmother by selling flowers on a street corner, the movie has us under its spell. While Chaplin is more known for his broad comedy, in “City Lights” it’s the small expressions on his face or the little moments that convince us almost immediately that he is in love. Take the moment the Tramp turns and picks up the flower he bought from the Girl with his last coin even though we have all but forgotten about it, or the joy in the Tramp’s eyes when a drunken millionaire gives him ten dollars to buy all of the Girl’s flowers.

Though there are epic moments of broad humor (I’ll talk about the boxing match in a bit), “City Lights” is the most subtle of Chaplin’s films, unafraid to let the jokes breathe or allow the characters time to develop their specific personalities. Even the reactions here aren’t as big as other Chaplin films. When the Girl is creating a knitting ball of thread and accidentally begins pulling string from Chaplin’s shirt, he does not jump, cackle or make enormous hand motions. He smiles and let’s her do it, only allowing the smallest bit of unease cross his face. We expect him to go bigger, and so the surprisingly intimacy of his moments with the Girl give them all the more impact.

Chaplin juxtaposes these with some great, bigger comedy beats. The Tramp befriends a suicidal Millionaire who only remembers him after having a few drinks, and much crackerjack comedy stems from several of their scenes together, the best being when the Millionaire jumps in a river with a rock tied to his neck. The Tramp rescues him, of course, but not before somehow getting the rope around his own neck.

The best comedic sequence of “City Lights” (and, dare I say, the funniest sequence in all of film?) comes when The Tramp enters himself into a boxing match to raise the money for the Girl’s rent. He thinks that his opponent will throw the match and they’ll split the profit, but (of course) he ends up against some dangerous brute. While he waits for the match, he notices another boxer rubbing his lucky rabbit foot and lucky horseshoe, and Chaplin does the same after the boxer goes up for his match. When the boxer is carried back barely conscious, Chaplin immediately begins trying to wipe the luck off of him.

The match is shot in long, unmoving takes that statically record the boxing, and this approach makes it all the funnier. We see the Tramp keeping perfectly in step behind the Referee in order to stop himself from being punched. We see the Tramp and his opponent each falling as soon as the other begins to get up. The sequence reaches its manic high-point when Chaplin accidentally gets the bell’s chord wrapped around his neck and it keeps abruptly stopping the match for a few seconds every time he’s knocked down.

Even during this chaos, Chaplin still allows for a small interlude where the Tramp imagines the Girl next to him and supporting him. It’s always about the Girl, after all. The Tramp loses the boxing match, but still manages to get the Girl the money for rent and an operation (he originally intends to keep some for himself, but selflessly gives her everything) to restore her sight. The moment they part choked me up, and I noticed a wonderful little alteration in one of the dialogue cards as the Tramp is about to leave the Girl, afraid she will abandon him when she realizes he is a tramp. The Girl’s final words to the man who has been nothing than kind to her are “But you’re coming back!” It was originally supposed to be a question mark at the end of the sentence (you can barely see it on the card), but Chaplin changed it to an exclamation point. That subtle change means so much for the character of the Girl. It means she needs him and cannot fathom her life without him.

The Tramp ends up in prison, and months later is released but cannot find the Girl on her usual corner. She has opened a flower shop with her Grandmother, her eyesight restored, and The Tramp wanders toward the store and their eyes meet. Though she (of course) does not recognize him, she senses…something…in him and offers him a coin and a flower. Their hands touch…she recognizes him…and the tears begin to flow. From my eyes, not theirs.

The moment in the film is played with such subtle beauty. The Tramp is scared of how she will react, but she doesn’t pull away. It is one of the great moments in all of film, and Chaplin wisely fades out quickly. We do not see a kiss. We do not see her introduce him to her Grandmother. Not even an embrace. Just The Tramp’s hopeful smile. Anything more would be a cheat. It’s a moment that, like all of “City Lights,” works because of its elegant, heart-warming simplicity.