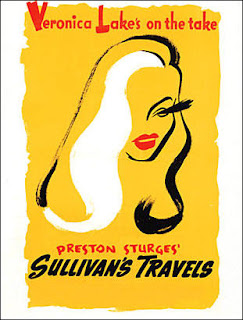 “Sullivan’s Travels” is a pretentious little comedy that thinks it’s much funnier than it actually is. More than that, for a film that ultimately claims to be all about the laughs, it’s pretty damn preachy and I don’t agree with its message. Perhaps there would be some redemptive quality to the film if its stars had chemistry and charm, but their scenes together are the cinematic equivalent of watching two storefront mannequins try to hold a conversation.

It opens with a dedication to “those who made us laugh.” These sort of pre-film dedications always make me cringe a little bit, as they often seem less like a dedication and more like the filmmaker saying “You have to like this! We are making it for you with the very best intentions!” Sorry, Sturges, it didn’t work.

What makes this entire affair bittersweet is that the first ten minutes of the film are fantastic, and for the rest of the movie you keep wondering where that movie went to and if someone loaded the wrong reel into the projector. Popular movie director Sullivan (Joe McCrea) meets with two studioheads (Robert Warwick and Porter Hall) to convince them to let him make “O Brother, Where Art Thou?”, which he is convinced will be the pinnacle of American tragedy and a fantastic representation of the down-and-out times they live in. The brilliant dialogue is spoken at such a rapid fire pace that even Howard Hawks and the cast of “His Girl Friday” would have been impressed. We get quotable quote after quote, my favorite being the following exchange:

Through the conversation, Sullivan somehow gets the idea to go undercover as a homeless man as research for “O Brother, Where Art Thou?” And then the problems begin—for us, not for him. The executives try and follow him in a large bus to record the entire thing to use as publicity, so Sullivan hops on a young boy’s go-kart (or something) and leads them on a long chase through the Los Angeles countryside (because apparently we have countryside now). During the chase, the poor cook in the trailer is decked with every imaginable food and thrown to-and-fro with the twists and turns of the road. This bit would be done later (and much better) by Lucille Ball in “The Long, Long Trailer,” but I mention it here because it is the first of several times the film throws in a random, uncalled for, slapstick sequences that really, really drag.

From this point onward the movie changes tone and humor-style every two or three minutes. Sullivan manages to find himself back in Los Angeles, where he meets a Girl (Veronica Lake) and they start what I assume to be verbal sparring with one another. I assume this because they are often the only two people in any given space together, but I can’t be sure since they never seem to look at or address one another. The Girl invites herself on the journey for reasons known to no one, packing only a small sack of belongings, which (as far as I can tell) is mostly a lot of lipstick so she can still look great while hopping on a train and sleeping in straw.

Why is she there? A police officer asks the same question at one point, and Sullivan responds, “There’s always a girl in the picture. What’s the matter, don’t you go to the movies?” Just because writer/director Preston Sturges called out how unbelievable it was that she was involved with Sullivan doesn’t make it any less contrived.

Perhaps I’d care more if Lake and McCrea had anything resembling chemistry with one another, or if either one was trying to act. Instead, Lake seems to be lazily reading off cue-cards for most of her scenes. McCrea does something similar for his scenes, though at least he speeds up his delivery when his character is supposed to care about something, even if he can’t change his tone or inflection. Sturges seemed to realize that McCrea wasn’t going to grip people emotionally with his one-dimensional performance, so instead of hiring a better actor just got McCrea shirtless as often as possible and hoped that people concentrated more on his body than his acting.

Then again, Sturges had a bigger problem, and that was finding a tone for the movie. For a movie that barely breaks the hour-and-a-half mark, it doesn’t even get started for the first hour by not letting its main characters escape from Los Angeles to set out on their trek. When they finally do begin their experiment, we get an four-minute, dialogue-free montage of the twosome wandering about amongst the bums. They seem to get no major life-lessons from the journey other than that the bums are really darn nice people, which is quite the letdown since this is what the first hour of the film has been leading up to.

But then Sturges contradicts that lesson moments later by having Sullivan (now normal again and handing out five-dollar bills to the bums before heading back to Hollywood) mugged and beaten by a greedy bum. The bum is then hit by a train. Seriously. Sullivan is dragged into a work camp for some reason or another where no one believes he is who he says he is. At one point at the work camp he and his fellow prisoners are taken to see a Disney cartoon, and he discovers the power of laughter.

Eventually rescued and reunited with the Girl, we are then spoon-fed the message of the movie, which is that people want nothing more than pointless humor, and then ends with a montage of people laughing in the same way mad scientists laugh when people call them crazy. Sullivan’s “discovery” doesn’t even make sense in messed-up logic of the film, since we learn early on that he has made several well-regarded comedies and musicals, so for him to just then realize that people like funny things makes zero sense.

On a deeper level, I’d bring up the notion that comedy cannot work unless you care about the characters involved in it, and that great comedy stems from you caring deeply about the drama of a given situation, however funny it might be, but then again I’m just an AFI student and this film is on their top 100 list, so what do I know?

There are many more moments I’ve missed, not out of laziness but because they are already fading from my memory. I remember something about him staying with a widow for a day, and also a subplot about McCrea’s character being married for tax purposes, but, like any given episode of “Two and a Half Men,” these memories are fleeting at best.

To me, “Sullivan’s Travels” doesn’t know what it wants to be, so it tries to be everything to everyone. Then, when that doesn’t work, it tries to make a statement about comedy that the entire movie that preceded that statement seems to contradict. Ah well, at least it’s trying, even if all it ultimately tries is my patience.