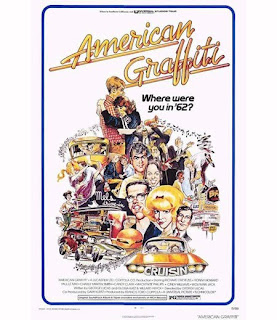 We’ve all had magical nights like the one in “American Graffiti,” haven’t we? Well, probably not, but give it ten years, a couple drinks and a really good cinematographer and you just might think you have. As the film begins it tricks you into thinking it will be at least a bit cynical, but by the end of the movie you are almost choking on the movie’s nostalgia. Here is a film that has become the archetype for so many other coming-of-age stories that tend to take place over the course of a single day, and each generation has a few very good ones (most recently “Superbad” and “Nick & Nora’s Infinite Playlist”) and helped to cement the caricatures that appear therein. And while “American Graffiti” is certainly a good film that still resonates with you emotionally and makes you laugh, several of its pupils have surpassed it (I’m looking at you, John Hughes movies) and because of that, time has not been kind.

The year is 1962 (really, AFI, you ranked the movie 62nd? Okay, it is kind of cute) and we follow several young men on the final night before they (most of them, anyway) embrace adulthood. The movie begins at dusk and ends at dawn. You know the types well by now. There’s the wishy-washy smart guy unsure of what he wants in life (Richard Dreyfuss), the clean-cut popular guy unsure if he wants to end his relationship or continue it (Ron Howard), the rebel with the coolest car in town (Paul Le Mat), and the geek who doesn’t need more words to describe him (Charles Martin Smith). And I’m guessing you can also guess just by my descriptions where they find themselves at the end of the night.

I have no idea whether or not “America Graffiti” accurately portrays 1962, but I’m guessing that while many of the small details are honed to perfection, the spirit of the times might have been fudged a bit for the sake of the movie. In the film’s version of the time period murderers will only stoop low enough to stealing quarters from pin-ball machines and forcing their kidnapping victim-cum-new cohort to sabotage a police car. Girls will gladly allow their little sisters to spend all night with a greaser known for drag racing. The card at the end revealing the respective fates of the four main characters doesn’t so much as sober up the audience but make you sigh loudly at the attempt to lend weight to the proceedings.

But that doesn’t mean that there aren’t numerous moments of enjoyment to be had throughout the movie. The script balances the four subplots easily and injects a lot of wit and laughter into the proceedings. Think about lines like this, “Your car is uglier than I am. That didn’t come out right,” or the moment where the nerd is accosted by a used car salesman determined to get a sale.

But then there are the scenes we’ve seen so many variations on that we’ve got the beats of the scene memorized before they begin. Look at when Smith goes into a drug-store to try and buy alcohol despite being underage. Or when Dreyfuss meets a man who may or may not be Wolfman Jack in an almost abandoned radio station. And then there is the race that serves as the film’s climax and Dreyfuss’ obsession with finding the beautiful blonde in the T-bird. As much fun as they once probably were, they drag horribly now and the movie feels long as a result.

All the film’s leading men turn in good, solid performances. Dreyfuss convinces us that he is indeed torn about his future, Howard is a pretty good douchebag when he wants to be, and Smith sure is charmingly geeky. Le Mat is the most charismatic and I enjoyed his subplot the most, and funnily enough he’s the actor who has done the least since “American Graffiti.”

But as good as these actors are, it’s the women who steal the movie despite being forced into playing second fiddle to the brooding men they interact with. It’s no coincidence that Dreyfuss’ subplot is my least favorite—the woman involved in it never materializes. Cindy Williams steals every scene she’s in, and is such a strong, sympathetic presence that when she reunites with Howard you really want her to move on and find someone better. Candy Clark is the definition of charisma and has most of the best lines and reactions in the movie, my favorite being her argument with Smith about who should pay for alcohol. Mackenzie Phillips is so very fun as the rebellious teenager both stuck in the car with Le Mat and also holding him hostage.

Ultimately, I admired “American Graffiti” more than I liked it. It engaged me to a certain level, but real moments of greatness were fleeting thanks to the countless other films that have used it as a jumping-off point. It has to be said that it did make me want to spend a night in the ‘60s, but with the exception of the ladies, I’m not sure I’d want to spend the night with these characters.