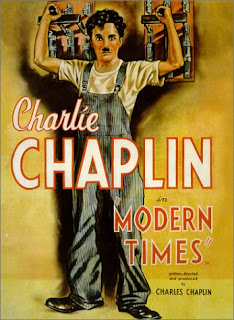 Though it is the last of Charlie Chaplin’s silent films, “Modern Times” represents the best possible introduction for viewers into the art of the silent movie. It’s a sad fact that most of the public will dismiss all silents with nary a second thought, but here is the movie you can put on for them and, by the end, you will have convinced them to open their minds to the magic of Chaplin, Keaton, Murnau and the non-racist version of Griffith. You see, the movie tricks the viewer into thinking it is a sound film before the words all but disappear, and the best part is that you don’t even notice. In fact, when dialogue returns later, it is almost an annoyance. I adore how the movie was made in 1936, entitled “Modern Times,” and actually is one of the most successful throwbacks in all of cinema.

In my last article on “American Graffiti” I noted how tired many of the plots and gags were because they had been imitated so many times since, and most of the major gags in “Modern Times” have also been re-used multiple times. The early moment of Chaplin needing to screw every bolt on a conveyor belt that keeps increasing speed was most famously re-done in “I Love Lucy,” I can think of a dozen films that use the broken-down house jokes (most memorably “Dick Tracy”) and Chaplin accidentally sinking a ship was re-done (badly) last year in “Sherlock Holmes.” And yet, unlike “Graffiti,” these jokes haven’t soured over time. Chaplin invests himself so fully into these moments that it becomes impossible to not be won over by his humor and charisma. He goes above and beyond to earn every one of the film’s belly laughs.

Time has been kind to the movie, allowing the realism of Chaplin’s stunts to make them all the more awesome today. There is a scene near the mid-point of the movie where Chaplin is roller-skating while blindfolded (seriously) right near a huge hole in the floor that drops four stories. You gasp through your laughs at the thought that there is actually a hole in the floor (!) that Chaplin is skating perilously close to (!!!). Holy shit! And then there’s the moment Chaplin (famously…but then again, what sequence here hasn’t become famous?) is swallowed into the mechanics of the machine he has been working on all day, or when he dives into a lake only to realize it is only a foot deep. We can see Chaplin’s face and know it’s him, making the moments all the more real.

The plot is surprisingly topical. Chaplin plays a man caught in the cogs of modern industrialization who has a nervous breakdown from being treated more like machine than man (at one point The Tramp is strapped to a machine that feeds him his lunch, but of course it malfunctions and begins stuffing his mouth with more food than he can eat—and a couple pieces of metal as well). He ends up in jail (where he takes cocaine!), where he becomes a hero, but when he is released the country has gone deep into a depression and he finds himself unable to keep a job. After several attempts at getting back into jail, Chaplin meets a beautiful street Girl (Paulette Goddard) and, together, they try to build a life together. Chaplin wasn’t just writing the film for the comedy, he had ideas about the time and political climate of the time and got them across with subtle beauty throughout.

I was shocked at how well the plot held together and became more than just the expected gag after gag. Chaplin and Goddard have a believable love story and share a character arc that resonates long after the final, bittersweet moments. When the Girl introduces the Tramp to the ramshackle home she has built for him on the banks of a lake, your heart leaps. When the Tramp and the Girl finally (Finally!) seem to achieve stability and success only to have it shattered by her past, your heart breaks. There are so many moments where Chaplin could have stepped wrong, but he rarely does. Chaplin must have thought so long about if The Tramp would speak at all and knew that if he didn’t, the audience would have been let down. And The Tramp is indeed heard for the first and only time here, singing a nonsense song when he can’t remember the words to the wild applause of his audience. Perfect. Because really, what else could he have said or sang that would have worked any better?

The one place the film falls short is in the characterization of the Girl. Though she is first seen cutting bananas to throw to homeless children, Goddard never becomes more than the woman The Tramp loves. She eternally plays his straight man, and there are opportunities missed for her to display the same type of humor Chaplin does. I’m thinking specifically of the scenes in the department store and when she is showing Chaplin the house she built for him. Goddard was a great actress, and still manages to make you love her despite not being as lovably engaging as she could have been.

Despite its dark underlying issues, “Modern Times” had remained lightweight up until its final few moments, but for Chaplin to pull away from the expected happy ending and give us something completely unexpected yet perfectly realized makes this movie transcendent. More than that, the music that underscores those final moments—which would later be turned into the song “Smile”—is one of the greatest melodies of our time. In its own way, I’d dare to say the ending to “Modern Times” is just as emotional as the (more famous) finale to “City Lights.” Whereas “Lights” is a fairy tale, “Times” reminds us that life will never be one—but as long as we love one another all will not be lost. We’ll get by.

An especially well-written review. As a fellow Chaplin fan, I would say that you have managed to capture the essence of what made his films so ... 'Chaplinesque' for want of a better word... Bravo. I hope that those who read this article will be inspired to watch Chaplin...