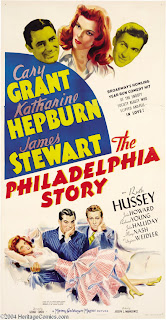 That Tracy Lord…what a dame. Not only does she appear to be the wittiest, wiliest woman in all of Pennsylvania, but she can perform a perfect swan dive and, as “The Philadelphia Story” begins, seems to have created the perfect fiancé for herself through sheer force of will.

“The Philadelphia Story” is the rarest of films: The thinking man’s romantic comedy. There are, of course, all the usual pratfalls, witty interchanges and rage-fueled sexual tension, but writer Donald Ogden Stewart seems more interested in examining the psyches of his main characters. Tracy and her three beaus are all messy, three-dimensional people with conflicting needs and desires.

Katherine Hepburn portrays Tracy with a fantastic mixture of gusto and withheld emotion. We can understand the defenses she has put up around herself. Her father is a philanderer and, as the film opens, is away with his much younger mistress. Her mother is a weak wet cloth of a woman. Her first husband Dexter (Cary Grant) loved her but became a slave to his alcoholism, and as a result their marriage fell apart. It’s pretty deep, dark stuff, but handled so carefully in the screenplay that the exposition and emotional undertones seem natural.

Dexter, now sober, has returned to Tracy’s family estate (which has to take up at least a third of Philadelphia) with motives that seem murky at first. Does he want Tracy back? Does he want to break up the marriage because he knows Tracy can do better? Does he want to embarrass her through the trashy magazine article he’s enabling?

Dexter has brought a reporter and photographer with him to write an expose on the Lord family. The reporter’s name, unfortunately, is Macaulay Connor and he is played, fortunately, by James Stewart. Connor is an “important writer” trying to find humor in the fact that he must now slum it up by writing unimportant exposes on silly families. He’s also sort-of/kind-of/casually sleeping with his photographer Elizabeth, played by Ruth Hussey. Hussey’s role isn’t large, and she ends up acting as an honorable mention ribbon at the ending, but she really kills her scenes. Between her work here and in “The Uninvited,” I can’t imagine why she didn’t become a bigger star.

Also involved (yes, there’s more) is Tracy’s fiancé George Kitteredge (John Howard), who is handsomely boring, or boringly handsome, whichever floats your boat. Stewart perfectly defines his character and his relationship with Tracy in their first encounter, where Tracy shoves him in the dirt to make his riding clothes seem authentic. Poor George seems more or less just as tedious as all of the token love interests we know aren’t right for our heroines, though he at least has a cool last name.

All the players (along with Tracy’s family members) are placed on the Lord family estate and you can almost hear Stewart and director George Cukor shouting “Go!” off camera. The humor manages to be both quick-witted while still letting the jokes breathe and sink in for maximum effect.

Cukor is, I believe, the best director of actors in the history of film, though Elia Kazan is a close second. He has a gift of allowing the actors to drop their inhibitions and surprise you with their versatility without making it seem like a show. His casts never seem like “actors” doing a show, and he also has a gift of choosing projects where our expectations about an actor can be turned on their ear. Look at his work with Judy Garland (in the performance of her career) and James Mason in “A Star is Born,” where we expect the star crossed lovers to find strength in one another instead of almost destroying everything they loved about each other. Oops. Or look at “Gaslight,” where Cukor makes the usually strong Ingrid Bergman an emotional, withdrawn wreck. In “The Philadelphia Story,” he slowly peels away the layers of Hepburn’s natural strength, ultimately displaying the vulnerability and psychological needs of her character.

And while Hepburn steals the show, Grant and Stewart are also aces in their respective roles as the men who have fallen for Tracy. Grant in particular surprises us with the raw emotion he displays in a poolside scene with Hepburn where he explains why their marriage fell apart. Both have considerable chemistry with Hepburn and make us think they could be the one she rides off into the sunset with in her dirty riding gear.

And therein lies the unavoidable problem of “The Philadelphia Story,” and that is that we can never fully invest ourselves into one of the couplings. Every time we think Tracy should be with Connor, the movie zigs back to an elegant romantic scene between her and Dexter. At a certain point the viewer has no choice but to throw his hands in the air and root for everyone and no one. We know Tracy will be happy at the end and stop caring who she’s happy with. These types of romantic triangles work much better in dramas than comedies because they are messy by nature, but this is probably the best example of one in a comedy I’ve seen.

The other major stumbling point in the movie is how it deals with Tracy’s father (John Halliday). In the first reels, she has cut off all contact with him because of his repeated cheating, but after he returns for the wedding, the movie, horrifyingly, seems to be fine with his behavior. His wife forgives him and they seem on great terms despite the fact that he will probably go back to his whore after the wedding. He tells Tracy that it’s basically her fault he cheated because she wasn’t a good daughter (!?) and that it should be expected of men. What. The. Hell!? Cukor’s later “Adam’s Rib” would deal with the same subject in a much, much better manner, and to see such an ugly, disgusting ideal here takes you completely out of the picture every time the father comes onscreen.

That ugliness is the exception in a film of surprising depth. If more modern romantic comedies had the heart, intelligence and humor of “The Philadelphia Story,” more husbands wouldn’t mind watching them and the divorce rate in America wouldn’t be at an all time high.