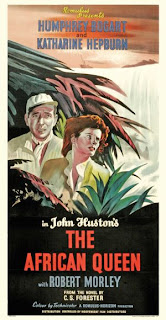 “The African Queen” is one of the rarest of “formula” films because not only do you forget that you are watching a formula picture, but you also become defensive about placing the film within the mechanics of storytelling. Charlie, Rose, the ship, the Ulanga River, Africa herself—they all seem so individual, so special to this movie and this movie alone. The film takes familiar ideas and trappings and brings them to life with such vivacity that these universal themes seem completely new. For me, that’s the sign of a real masterpiece.

We open in deep Africa where a spunky, God-fearing woman named Rose (Katherine Hepburn, of course) and her brother (Robert Morley) have set up a mission. There only contact outside of the tribe of Africans they preach to is a ne’er do well boat captain named Charlie Allnut (Humphrey Bogart), who brings them news of a world war breaking out. England and Germany are the main players, but Charlie knows nothing of the reasoning behind the war or who’s got the upper hand. The mission and the village are soon burned by the Germans, who have brought the war to Africa, and Rose’s brother dies not long after. Charlie invites Rose to escape the chaos on his boat (the Queen of the title), and soon they find themselves on what seems to be a suicide mission down the Ulanga River to bomb the German gunboat The Louisa to save Queen and country.

Their journey down the river is a metaphor for Charlie and Rose coming back to life, but still, I’m always struck by how sparse and dead they seem in the opening scenes. Hepburn’s face was quite beautiful, but as Huston introduces her seated at an organ, we find her prominent cheekbones and chin have been underlined to the extreme. Her face seems too thin, her bones too obvious—she seems more ghost than human being.

She and her brother don’t seem to belong in Africa, but then again neither does Charlie. There’s a brilliant early scene where the three characters share tea that is the best “fish out of water” moment in film history. Charlie sits there in his sweat-stained mechanic gear, stomach unable to stop grumbling. He’s fully aware he doesn’t belong in the company of such classy Brits. But then again, why are Rose and her Brother pretending they are in Mother England and not the jungles of Africa, insisting on putting cream and sugar in the tea while taking in the newspaper and making polite small talk. Nothing fits, no one knows exactly what to say and the characters want to stop the guise of politeness but don’t want to seem rude. After her brother dies and Rose has gotten on The African Queen with Charlie, he is just trying to be polite when he agrees to her scheme to sink the Louisa. Neither know what the war is about or have any reason to involve themselves, but Rose feels as if she must.

Once Rose and Charlie get out on the open river, we are just as surprised as they are that they do, in fact, click as individuals. They bring out the best in one another and help to tone down the worst aspects of the other. They surprise us, whether it’s when Charlie goes back out into the rain instead of insisting on staying under cover or when Rose hacks through the jungle of reeds with a machete. Of course they fall in love, but the build-up is done so subtly that when their first innocent kiss happens it comes as a surprise every time I see the movie.

These are two people who have never been in love before, you can tell. They peck at one another, hug a lot and say all the things people in love say because they figure you should say them. They try to show off for one another, though since they are in a barely-floating boat in deep Africa that involves pretending to be hippos and making each other coffee. Though we don’t immediately get that “The African Queen” is a comedy, it is one of the best. After Rose and Charlie kiss, Rose begins to call him “Dear” repeatedly until finally building up the courage to ask “Dear, what is your first name?”

By the time we finish laughing about that last crack, we can see Rosie’s smile when Bogart introduces himself as “Charlie.” It’s as if she is saying “I’d hoped it was that” without her actually saying it. Everything becomes about how the two characters interact, and the odd ways they compliment one another through their actions. Hepburn and Bogart are both amazing here, giving the performances of their respective careers. After seeing Bogart glower and look forlorn in endless P.I. movies, it’s just aces to see him actually smile and invest himself wholeheartedly in something. You get the feeling that he’s really stretching in this role, and it probably had a lot to do with his history and familiarity with John Huston. Hepburn has played a lot of headstrong women, but never one as genuinely lost or more loving than Rose (though her role in “Summertime” comes close). The movie would flounder and die within moments if anyone else were cast.

At first the film doesn’t seem like the kind of movie John Huston would direct, but its humanity and careful character work convince me otherwise. Though he could be a hugely stylized direct when he wanted to, Huston knew when to stay out of the movie’s way and just let it breathe and come to life. There’s only one showy shot in “The African Queen,” when Huston pulls his camera up to show the ship marred in reeds only a hundred feet from freedom, but you don’t need that kind of work here. Glamorous shots of the river and Africa are the last thing this movie needed. We want to stay close with Charlie and Rose, and that’s what Huston does. He also treats the characters with more sympathy than any others in his many films. There’s no judgment about Rose being such a devout Christian or Charlie being so uneducated, and that makes the characters that much more powerful.

Every time I watch “The African Queen” I get carried away in it, and I didn’t write that to make a river metaphor. Everything in it feels just right. How can you not root for these two lovable losers trying to do right and not get destroyed before they have the chance? The film surprises us even though its storyline follows a familiar path, and its characters share one of the definitive romances ever filmed. But, more than anything, it makes you unapologetically happy, and what more can you ask from a movie?