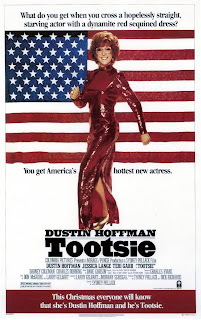 “Tootsie” is a great comic film to begin with, filled with excellent performances and smart writing. But the filmmakers were interested in making something more than just a cross-dressing comedy. You’re watching discussions about sexism, sexual and gender identity, personal identification and emotional maturation…but you don’t really notice it because the film is just so damn good. Though the main character preaches, the movie doesn’t seem to, and though many of these topics have long since become softball subjects, the film is so well-told that it doesn’t matter. As soon as it was over, I wanted to watch it again.

Dustin Hoffman plays Michael, a great NYC actor who is so difficult to work with that his personality has blacklisted him with every producer and director in the city. He’s desperate. He’s also a fantastic acting teacher and no one apparently told him that he’d be a good director, but forget that. His solution to finding work is to create Dorothy, a spunky woman who is immediately cast on a horrible daytime soap opera. To his shock, Michael finds that Dorothy seems to have a mind and values of her own (“I think she’s smarter than me,” he admits at one point), and these values actually help him improve as a human being. To the studio’s shock, Dorothy becomes the new star of the show, her unwillingness to be a female cliché refreshing to all the women watching at home.

Also in play is Julie (Jessica Lange), an actress on the show who befriends Dorothy and is inspired by her new friend to blossom as a human being while her father (Charles Durning) begins to crush on his daughter’s new BFF. Michael finds himself attracted to Julie as a man, but she’s in a bad relationship with the soap’s director, played by Dabney Coleman, who does another fine version of his “sexist, egotistical, lying, hypocritical bigot” character from “9 to 5.” Oh, and Sydney Pollack (who also directed) is excellent as Michael/Dorothy’s agent, who always seems to be on the verge of a nervous breakdown.

By this point we’ve all seen what we expect is every variation on the cross-dressing comedy there could possibly be. The formula seems to be quite limited, and though it has resulted in two masterpieces (this and “Some Like It Hot”), can you think of another version that is even halfway decent? And yet “Tootsie” finds a way to feel fresh and engaging despite the apparent limitations of its genre. A big key to this is that there is no “transformation” scene leading into the first appearance of Dorothy. There’s simply a cut from the male Hoffman to the female version walking down the street. By doing this, screenwriters Larry Gelbart and Murray Schisgal (best worst last name ever) immediately establish Dorothy as a distinct character from Michael and that we should approach her that way. When we later see Michael transforming into Dorothy, he remarks about her as if she’s a real person (“She would live alone!”) because she “feels” like a real person to us.

I cannot underline enough how excellent Hoffman is as Michael/Dorothy, simply because he doesn’t overdo it. These are two different people and he treats them as such. He doesn’t overplay the little winks and nudges to the audience, which makes them all the funnier when they come. It’s weird, because he’s almost passable as a fairly ugly woman, and it’s odd how quickly we become used to his southern high voice. And I love how the screenplay uses both of these things to make the movie even more multi-dimensional.

It would be easy for Hoffman to steal the show, but the supporting cast is all-around aces. Durning is quite genuine throughout and we really feel bad for the guy when he proposes to Dorothy. Bill Murray brings the right amount of cynicism and snark to his brief scenes, and I’m very happy to see the film doesn’t overdo his shtick, because any more would feel overboard. Teri Garr is suitably hysterical as a woman Michael uses early in the movie before maturing, but the interesting thing is that Garr doesn’t turn her into a dumb blonde. She’s hysterical, but not stupid.

And then there’s Lange, who must have been quelling chuckles in just about every scene with Hoffman, even the dramatic ones. Because she’s so genuine with Hoffman in drag, we create genuine feelings for the character, and when the chips fall and Dorothy is un-wigged at the climax, I was surprised at how invested I had become in the relationship. The final scene, involving Lange and Hoffman out of drag, is beautifully balanced, written brilliantly and surprisingly understated. It feels just right.

In case I haven’t mentioned this yet, in addition to everything else, the movie is fucking hilarious. I was in tears from laughter during the magazine photoshoot montage, and for every bit of slapstick there is a really smart line worth quoting. It’s a mix that could have gone horribly wrong, but because every part of the creative team rose to the occasion, it works. And the writers avoid plot holes (well, fudge plot holes) by turning them into jokes about Dorothy having to do her own make-up or getting no close-ups on her show (“I’d like to make her look a little more attractive, how far can you pull back?” “How do you feel about Cleveland?”).

Yeah, it’s not quite as good as “Some Like It Hot” (there is one quite obvious weak point in the way the film treats the soap’s lead actor), but how many comedies are? “Tootsie” is the type of movie that feels irresistible. It feels universal. And it feels deep, which you never would expect of a movie about a dude in a dress.

I too am watching the AFI top 100 and Tootsie is the next movie I am doing. Hopefully I like it as much as you did.

Check out my blog:

I've been reading and I can't wait to hear your thoughts on the film! You're doing great work!