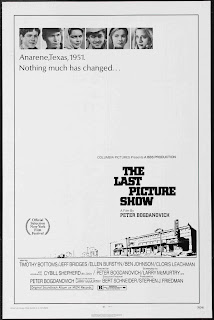 “The Last Picture Show” was one of the films on the AFI Top 100 that I hadn’t watched before, and now here I sit in awe of it. How could I not have seen this film …experienced these feelings…known these characters? How easily it has entered into my consciousness, its world a familiar one I feel like I’ve always known.

The setting is a small Texas town that seems to only have one main road and three open establishments: a bar, a burger joint and an old movie house, all owned by Sam the Lion (Ben Johnson). We meet two best friends, Sonny (Timothy Bottoms) and Duane (Jeff Bridges), and watch them come of age together. Sonny begins an affair with the wife (Cloris Leachman) of his football coach, while Duane struggles with his feelings for the town’s prettiest girl, Jacy (Cybill Shepherd). Things get complicated before they get more complicated.

All I had heard about the film before seeing it was that it was a younger generation’s “Citizen Kane,” and you can certainly see similarities and inspiration drawn from the Welles’ film. As the credits roll, we see small snippets of scenes with the actors’ names, exactly the same as “Kane,” and then there’s the use of “deep focus” throughout. The moment where the inspiration is at its most obvious is when Sam sits at a pond and recounts just how in love he was with a woman years ago. Obviously, the scene comes from the businessman in “Kane” who clearly remembers a girl he saw once on a dock decades ago. That might well be the best written scene in all of film, and the one in “The Last Picture Show” is similarly moving and devastating, though in a different way.

However much co-writers Larry McMurty and Peter Bogdanovich (also the director) used “Kane” as an inspiration, that film was about the impossibilities of understanding a man. This film is about our inherent understanding of its characters. At different moments in our lives, we have been all these men and women, and we sympathize and understand their actions, however frustrating they may be. Leachman’s character is given a moment of rage near the end, after Sonny abandoned her for months, and the words are incredibly painful—we empathize so much with what she’s been through and how hurt she’s been. And yet we also sympathize with Sonny, who left her because he thought he was in love with a woman his age—and was too young to understand how to handle his feelings or the situation.

Even Jacy, who is portrayed as an enigma to the men who can’t help but fall in love with her, manages to get our sympathy. The boys at the center of the film never see their home lives explained or illustrated in any detail (they don’t need to be), but we get to know Jacy’s mother (Ellen Burstyn, nailing her small part), and there’s a small moment in the kitchen between them where the viewer goes “Ah, now I understand who this girl is.”

Bottoms is the heart of the film, wonderfully cast, and manages to emote the frustration of his situation without seeming like he’s pouting or waiting for a violin to play. Though he plays friends with Bridges, they look like they could be brothers, and the moment where they experience a movie together on the final night at the theater before it closes is just about perfect.

The town around Sonny is dying, and I don’t just mean that in a metaphorical way. Every shop aside from the three I mentioned above appears closed, and by the end of the movie the theater closes as well. Sonny has to work another job just to keep the bar open after he inherits it. We’ve all driven through towns like this, barely giving them a thought. What must it be like to live in that place, desolation around you, lonely and begging to hear anything other than your own thoughts, knowing you can never escape them. Sounds a lot like adolescence to me.

Bogdanovich shoots the film in black-and-white, which underscores the wretchedness of the place but also the beauty of his main actors. Shepherd is just about as lovely as any teenager I’ve ever seen, and I’m going to echo what I said earlier in my “Taxi Driver” article: I wish that she would go back to serious dramatic acting instead of settling for guest-starring roles on “Psych” and “$#!+ My Dad Says.”

There isn’t much of a plotline, per se, but I don’t think I realized that until I typed this sentence. “The Last Picture Show” is more about a collection of moments that build these wonderful characters for us and the ways those characters bounce off of each other in ways both expected and unexpected. We have a pretty good idea that the Burstyn character was the dame Sam was in love with, and when it’s confirmed there’s a lovely scene where she reminisces for a moment about how wonderful life was…right before she drives home to her horrible husband. McMurty and Bogdanovich ensure that each character gets the chance to become a complex, layered “person,” and that’s one of the reasons you remember the film as a state of mind as much as you remember the individual moments.

The biggest compliment I can give the film is that the characters linger in my mind like real people would. I wonder what will happen to them and where their lives will take them as they continue on their respective journeys, meeting one another from time to time and impacting each other in ways both obvious and subtle. When I wrote about the coming-of-age film “American Graffiti,” I mentioned that if the characters were real people, I wouldn’t want to be friends with them. Here, I’d love to eat a burger with Sonny and then watch “Red River” with him, Jacy and Duane, even if they are trying to get up her skirt the whole time.