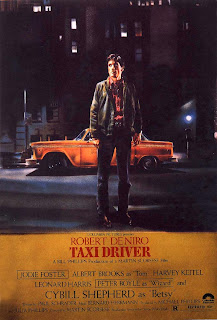 You first realize something might be screwed up in Travis Bickle’s head when he doesn’t complain about the traffic. Everyone in New York City, even those who don’t drive or never take cabs, complains often and loudly about the traffic. If roads are indeed the veins and arteries of a city, then New York is consistently in the midst of the worst heart attack ever. And yet Travis doesn’t seem to mind. He people-watches during all his time in standstill traffic, and what he sees around him sickens him.

Travis (Robert De Niro) is the taxi driver in “Taxi Driver,” and the movie follows his slow, sick slide into psychosis. He tries to become romantically involved with a political activist (Cybill Shepherd), but is rebuffed after thinking it was a good idea to take her to a pornographic film. He then attempts to take a twelve-year-old prostitute Iris (Jodie Foster) under his wing, even though she insists she’s perfectly happy selling her body for money. All the while, he gets angrier and starts buying really, really big handguns.

Writer Paul Schrader and director Martin Scorsese present Travis in a series of seemingly disconnected scenes that slowly build his character. The voice-over narration tips us off that Travis might be a little…uh…psychotic, and when we see his handwriting this is confirmed since it’s scrawled in that creepy child-like way we’ve all seen on A&E serial killer specials.

But the really interesting thing is that, if you delete the voiceover, Travis doesn’t seem all too crazy in the film’s early scenes. He’s good looking enough, and when he charms his way into coffee with Shepherd’s character Betsy, he makes a speech at the diner where he talks about connections between people. I realized that, if you just look at this scene apart from the rest of the movie, the dialogue could easily be spoken by Ryan Gosling in his newest romantic comedy and not miss a beat. But in “Taxi Driver” the dialogue slowly gets under our skin. We become nervous…not because we think Travis will hurt Betsy, but because we still strangely empathize with his character and don’t want him to make a fool of himself. Shrader’s dialogue and characterization is just aces throughout this scene and every other - smart and brutal but still human.

To a certain extent, we all sympathize with Travis because we’ve all felt lonely and abandoned. Scorsese obviously does – when Betsy breaks things off with him the camera literally pans away, unable to show Travis’ world shattering. That’s the reason it breaks our hearts a little bit when the bullets start flying. We care, damn it. Though they aren’t tonally similar, if you compare Travis with similar characters from “Fight Club” or “American Psycho,” you will see that those films choose to make their anti-heroes all gloss and surface instead of really digging in. But Schrader and Scorsese aren’t afraid.

Soon he’s got a Mohawk and is planning a political assassination before murdering a bunch of pimps. Is he trying to “rescue” the women from their clutches? Perhaps he’s telling himself that. But then there’s the thought that these men are “keeping” Travis from these women he could love in one form or another…and because of them he has been abandoned once more. Is it revenge? Or has he just lost his mind to the point where he wants to lash out? Perhaps all of the above? The line is beautifully blurred and works any way you look at it, which just makes the writing and direction even more brilliant.

Of course, none of that would work without the right leading man, and De Niro is perfect here. He works well as the everyman, but there’s a hidden savagery in his eyes that allow us to segue with his performance into his mania. Shepherd is wonderfully appealing in her small, memorable role, and it makes you wish she’d get a great role to play with again, instead of guest-starring on “$#!+ My Dad Says” and “The L Word.” Foster is fine as the young prostitute, but even then had a knowledge and tenacity that make you think she would have been able to figure something better out.

The violence that climaxes the film is still overwhelming and brutal, not because of its savagery (it’s gross, but we live in an age of “Hostel” and “300” so we’re used to it) but because we do still care about Travis. Iris is there too, but we don’t fear for her safety so much as are horrified about how she’ll react to Travis’ actions.

I’ve had several discussions at AFI about whether the final moments of the film are a dream or not. I believe they aren’t, and not just because I really just hate movies with pseudo-dream endings (sorry, “Shutter Island”). The movie works much better if taken literally. There’s dialogue in the letter from Iris’ parents that subtly implies that she’s caught in a new type of hell back in Smalltown, USA, that would not be there had this been a “happy ending dream.” Also, my mind honestly just can’t imagine the final moments in the cab between Travis and Betsy, so understated yet filled with meaning, to be anything less than real. In fact, it’s almost too real and honest.

As I said earlier, “Taxi Driver” presents us with small disconnected moments in Travis’ life more than the slow-build narrative we would normally expect. And, really, isn’t that how we view the lives of everyone around us? Our best friends, our husbands and wives, our lovers, our co-workers…we only see small or long chapters of their life apart from the whole. There is only so much one can know or understand, and there will always be questions that remain.

I like the way you write.. Keep posting :)
PHL Airport Taxi

Thanks for an insightful post. These comments are really helpful. I found a lot of useful tips from this post, 000-318, 000-283, 000-283, We are proud to say that we have the relevant exam material which we acquire after thorough analysis of most recent exams.

Thank you for another essential blog. Where else could anyone get that kind of information in such a complete way of writing? I have a presentation incoming week, and I am on the lookout for such information, , and more detail.

Thanks for one’s posting! I quite enjoyed reading Your Post; you could be a Very great author. I will make sure to bookmark your blog now and will eventually come back in the foreseeable future always. I want to encourage you continue your great writing Skills, have a nice evening!
Call Girls in Dubai

Thank you for sharing this great kind of information which really inspire me and remove all today's boring.There are losts of fun.
Indian escorts in Dubai
Escorts in Dubai

Hello wishing Happy New Year to everyone and specially to Admin and thank you to allow me.
Here we have big collection best escorts in Dubai +971552300726 which are young, experienced and brilliant. We are providing our Dubai escorts services in Dubai, Sharjah and Abu Dhabi. People mostly desire young & Indian escorts in Dubai and we are merely giving here young call girls in Dubai. Our foremost aim is to give you most excellent & special services because customer’s satisfaction is the first main concern for us. Our Indian escorts in Dubai will make you glad & comfortable.

Dubai Play Girls agency +971553279569 is for those who are looking for escorts in Dubai. Some people always like modern, sexy and stylish girls and they always love to get their favorite one. Indian escorts in Dubai are very beautiful, attractive and stylish and they always attracts to others with their body language and smooth touch. Get pleasure from the most excellent Dubai Escorts Services by our delightful Female model escorts in Dubai. We are as well giving you discount on call girls in Dubai and our escorts services are available 24/7.

Thanks for Posting in such an incredible campaign. Escorts in Dubai this certainly a fantastic piece of work I must say that overall I am really impressed with this blog. Dubai Escorts Definitely Your Blog is so interesting and very informative superbly written and well explained Keep It Up.
Call Girls in Dubai
Indian Escorts in Dubai

Thank you for your participation in such an incredible campaign. Call Girls in Dubai I must say that overall I am really impressed with this blog. Certainly a fantastic piece of work. Dubai Models Escorts Thanks for posting this. Your blog is so interesting and very informative. Looking for other posts also. Keep it up. Escorts in Dubai
Indian Escorts in Dubai
Dubai Call Girls

Here we have big collection best escorts in Dubai which are young, experienced and brilliant. We are providing our Dubai escorts0 services in Dubai, Sharjah and Abu Dhabi. People mostly desire young & call girls in Dubai and we are merely giving here young Indian call girls in Dubai. Our foremost aim is to give you most excellent & special services because customer’s satisfaction is the first main concern for us. Our Indian escorts in Dubai will make you glad & comfy.

Such a great blog, this is perfect for introduce to our Dubai escorts business. Dubai Royal Escorts presents you huge collection of Indian escorts in Dubai +971569772863. Everybody knows about Indian beauty. We are glad to show you the most beautiful escorts in Dubai and I’m impressed by the info that you have on this blog. So feel free call us now.
escorts in Dubai
Indian Escorts in Dubai

Fantastic and awesome stuff as usual keep up the amazing work here. Escorts in Dubai I truly enjoy looking through on this site. Indian Call Girls in Dubai Be absolutely determined to enjoy what you do. Pakistani Escorts in Dubai I am wondering how I might be notified when a new post has been made.