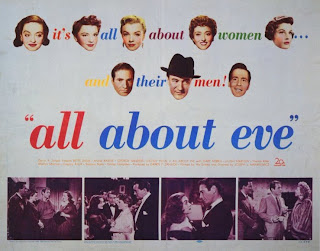 The secret of “All About Eve” is that it convinces you for a very large part of its running time that it’s much more cynical than it actually is. Considering the film’s title, purposely dry voiceover and the framing of the movie so it begins at Eve’s moment of triumph, one would believe the story is simply about Eve (Anne Baxter) knocking everything and everyone out of her way on her path to stardom, but I think that’s wrong. It’s about those people who survive Eve as she pushes her way through them—they are good, flawed people who ultimately find the strength to be happy despite the fact that the could have easily been roadkill.

We first meet Eve, and those survivors, in the film’s opening minutes, at a theatre awards dinner where she is about to be given, from what I can surmise, the “Greatest Actress Ever” award. The voiceover that introduces us to the characters is provided by Addison DeWitt (George Sanders), a theatre critic and columnist who has declared himself the most powerful man on Broadway. He doesn’t actually say this in the film, but I’m guessing he’s forced that surname into the masthead of his newspaper. A close cousin of the Waldo Lydecker character in “Laura,” he’s the kind of guy who you can’t help but call by his first and last name because to do otherwise would feel wrong, and his words here crackle with wit:

“The distinguished looking gentleman is an extremely old actor. Being an actor, he will go on speaking for some time. It is not important that you hear what he says.”

We soon flash back to how Eve got on that podium, and meet the people she will step all over to get there. Chief among them is Margo Channing (Bette Davis), who Eve basically stalks until she gets an introduction thanks to Margo’s best friend Karen (Celeste Holm). Davis’ performance doesn’t seem like a performance, which is the highest compliment I can give it. Margo has recently turned 40 and is at the peak of her career and skills, but knows she’s now too old to play young 20-somethings. She is horrified about what will happen when the rest of the theatre community realizes this as well. She’s so afraid of her age that she refuses to marry the love of her life, Bill (Gary Merrill, memorable thanks to the extremely annoying way he holds his cigarettes) because he’s a few years younger.

Margo and Eve become “friends” and Eve begins to use Margo’s contacts as stepping stones, making small jumps at first until she ultimately uses blackmail and threats of adultery to get her way. Margo’s maid Birdie (Thelma Ritter) notices things first; “It’s like she’s studying you!” she says to Margo at one point, and soon enough Margo gets wise to what’s happening as well. Mankiewicz is extremely smart to let the characters become privy to Eve’s motives early enough to make them seem wise and not like the idiots in soap operas who can never see what’s right in front of them.

It’s the women that notice everything first, of course, and their men take a bit more time to get it together. All the while I was astounded by how raw and real the characters, particularly Margo, were. When Margo self-destructs at a party for Bill, we are horrified but our hearts still go out to her. Because we recognize Margo as a fragile person, we don’t want Eve to succeed, but of course ultimately Eve’s machinations are just the kick in the pants Margo needs to get herself and her life together.

Eve’s character becomes much more prominent as the film continues, with Mankiewicz phasing Margo and the other characters out once they’ve found their strength and happiness. Davis gets all the huzzahs for her performance while Baxter’s is usually regarded as less-than-stellar, but I don’t know about that. I’m guessing that Mankiewicz wanted her to be a cipher more than anything else, and the way he shoots and blocks her supports that. In his tremendous script, full of intelligence, humor and wit, there isn’t a single line from Eve that lingers in our mind. She never begins a conversation and only seems to speak in response to what other people say. The most initiative she takes (until the final scenes) is to ask questions instead of making blatant statements. Perhaps that is why everyone finds her so acceptable—because she agrees with everything they say and there’s a vagueness about her personality that makes you define her instead of defining herself.

Mankiewicz’s script breaks a bunch of rules about structure, voice-over and narrative point-of-view, but does it with such elegance and ease that you can’t help but go along for the ride. Note, for example, that we never see Margo or Eve actually acting on stage in a film that is about actors. I’ve seen the movie a few times now, and with each viewing I become more in awe of his direction, and that he didn’t stoop to theatrics. The movie didn’t need it. His camera is never showy until the last shot, but its placement and use is still great. Note how he always frames Eve in the frame with Margo and Bill early in the movie, foreshadowing what is to come later. Or how he blocks Margo and Bill breaking up, the most melodramatic moment in the film (purposely so) on a stage among exaggerated props.

Oh, and did I mention Marilyn Monroe is in the movie in a small-but-crackerjack supporting role? She’s never given a major close-up and yet our eyes cannot help from lingering on her no matter what else is happening in the frame. I believe that’s what it means to be a movie star.

Perhaps the smartest move Mankiewicz makes is not allowing Eve to get her comeuppance during the film. She thinks she’s triumphed, but we see that the other characters have moved on from her games and will not have to deal with her again since she’s leaving for Hollywood. And then, of course, there’s Phoebe, Eve v. 2.0. Just her introduction and a small hint of what to come was enough. Anything else would have been unrealistic and far too much. Here is a movie that knows its audience is smart, knows it can get away with subtlety and knows what we come up with for Eve’s fate is so much more delicious than anything that could have been up on screen.