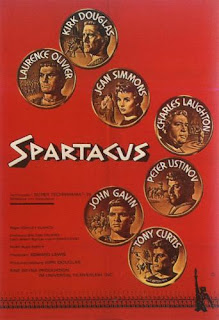 The problem with the “spectacle” films of the ‘50s and ‘60s, when studios saw running time and Cinemascope as the answer to the problem of television, is that the actual spectacle lasts about twenty minutes or less in the films’ usually three-and-a-half-hour-plus running time. Over-actors fill the rest of the reels with overblown, stodgy dialogue while looking generally hilarious in bad costumes and worse hair styles. “Spartacus” separates itself by actually having something to say in those long passages between the crackerjack “spectacle” sequences.

Kirk Douglas is the title character, a slave who trains to be a gladiator before leading a revolution, first against his captors and later against all of Rome. He seeks freedom for himself and the ever-growing group of slaves that march through Italy toward a group of pirate ships on the coast. There’s more, of course, three hours of more.

The driving force is no more or less inventive than any other film of this type. It’s all about the execution. The “villains” of the film are genuinely engaging, three-dimensional characters who do not shy away from having ethical discussions.

First and foremost is Peter Ustinov as the owner of the Gladatorial school Spartacus trains at. Ustinov’s performance is the best in a film of great supporting performances, and he is so gleeful in his one-track-mind that he earns our love despite his unabashedly-underhanded behavior.

Next up is Charles Laughton, who could have easily walked through the role but injects his Roman Senator with a surprising amount of decency. In the film’s final moments, when he procures safe passage for Spartacus’ wife (Jean Simmons), he surprises both us and himself with the humanity he displays. Usually overlooked is John Gavin, who is just aces as a young, cocky Julius Caesar, whose loyalties are always in flux.

Laurence Olivier plays Crassus, who becomes the ultimate villain of the film even though he only has one scene with Spartacus, and even his motivations come off as more thought-provoking than evil, despite the fact that he crucifies 6,000 slaves and oversees the slaughter of thousands of others. Olivier is one of those rare actors who always seems to be thinking, even when he isn’t speaking in a scene, and the film’s writer, Dalton Trumbo, gives him some of the best dialogue in the movie.

Crassus’ villainy is oddly approached in the film. He’s the villain because the movie seems to insist that he has to be the villain, and some of his actions in the second and third act seem out of character with the intriguing, multi-dimensional person that had been set up before. It’s difficult, because the real thing Spartacus and his army fights for here isn’t a person…it’s an idea: Slavery. All the Romans in the film keep slaves, and in theory are all just as evil as the next character. Of course they were never going to “beat” slavery or end the idea, so it needed a face, and that was where Olivier came in.

Alas, in comparison to these fascinating, great villains, Spartacus comes off as horribly two-dimensional. He wants freedom…he wants freedom now! Oh, and he loves his woman. You don’t get much more than that, but Douglas does well with what he’s given, and manages to give quite a good performance despite little dialogue of any depth or interesting characteristics.

Of course, since this is a “spectacle” film the costumes are, unsurprisingly, atrocious and I highly doubt Roman women had the hairspray and conditioner to create such perfectly sculpted over-the-top hairstyles that they have here. Poor Simmons tries to act through horribly overdone make-up and over-touched hair, which almost always manages to be present even though she’s merely a slave. Then again, what else are we to expect?

Of course, there are things to treasure about movies of this type as well. Alex North’s brilliant score is both intimate and suitably epic when it needs to be, and its melodies linger long after the film ends. And there’s something so special about looking at those wide, beautifully shot scenes and sequences where you know you are actually looking at hundreds of soldiers slowly marching toward you. Needless to say, the bloody battle scenes do not disappoint, and the aftermath, where soldiers wander through what appears to be thousands of dead bodies, is rightly unsettling.

The writing is good, though shockingly unbalanced at times. It’s hard to believe the same writer crafted the carefully worded monologues about belief and the sloppy, horrible lines of exposition like “It’s Spartacus again? This time he dies!” And I have to wonder who allowed that atrocious voice-over at the beginning of the film that explains nothing that we need to know.

“Spartacus” doesn’t feel like a Kubrick film, though it has all the technical mastery one would expect from his work. The whole is much too emotional, and there’s too much heart here for it to be real Kubrick. I don’t mean this as a negative, I only mean to say that if I did not already know that he was involved going in, I would not have been able to tell you who was the director when walking out.

I have such mixed feelings about the false hope manufactured by the ending. Yes, the filmmakers should be given a lot of credit for ending the movie without your typical happy ending, and watching Spartacus slaughter his best friend (Tony Curtis) and then be crucified is a pretty ballsy move. And I did feel like having Laughton’s character freeing Simmons and the baby was a beautiful, touching beat…but then she found Spartacus up on that cross. Simmons holds up her baby and declares the child “free.” Well, yes, but so what? How is that supposed to make up feel better? The only reason she and the baby are free is because of Laughton. Every other person who was part of the rebellion is dead. Every. Other. Person. And slavery is still there, and would be there for another two-thousand years. Having the filmmakers try to make it feel like a positive when it really isn’t feels convoluted and doesn’t ring true.

“Spartacus” is a mixed bag, distinguished and great in some respects but tired and overblown in others. It’s the best “spectacle” film to come out of Hollywood in that time period, but is that really saying all that much? I’ll remember it more for the four brilliant performances at the center than anything else about it, but that alone is more than enough to make it worthwhile viewing.