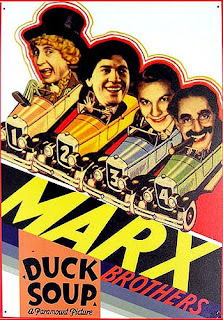 Not only is “Duck Soup” near-unreviewable, but it flaunts its faults and flips off those who would be critical of it. Were I to tell the filmmakers that the film didn’t have a plot, they would tell me its because they wanted to be cremated (wocka wocka wocka). If I were to bring up the atrocious song-and-dance numbers, they’d tell me…but I better stop before I embarrass myself any further by trying to be funny.

The plot is utterly unimportant and virtually untellable, but involves Groucho Marx as Rufus T. Firefly taking over the country of Freedonia. There are coups, wars, Harpo and Chico as peanut-peddling spies and even Zeppo is there. Aside from the main titles, we see no ducks and even less soup, so the name is meaningless (then again, how many Marx Brothers film titles meant anything?). What it really seems like happened was that Groucho wandered onto the set of one of Paramount’s serio-political costumers and decided to liven things up a little bit, first by himself (okay, Zeppo was there too, but he doesn’t count) and then by bringing in his brothers. The crew went with it.

The cast and creative team obviously went to great lengths to make the guys’ routines seem completely off-the-cuff, and it works. For the most part it seemed as if director Leo McCarey (director of one of the funniest films of all time with “The Awful Truth” and one of the most depressing of all time with “Make Way For Tomorrow”) just put the camera down on a medium shot and walked away. There are no showy camera movements or zooms lesser directors might have done to underline the comedy, and that’s just what the movie needs.

Groucho’s dialogue throughout the film is endlessly quotable, and yet to quote it here would be to undercut its brilliant delivery. Okay, just one: “I’ve got a good mind to join a club and beat you over the head with it.” These quotes often live in a world all their own, with the cast completely still around him hanging onto his every word and attempting not to laugh.

Chico and Harpo handle most of the screwball physical comedy (except for the mirror scene, but more on that in a bit), and are at their most funny while spying (I think that’s what they are supposed to be doing) as a peanut salesman and bystander, respectively, outside Groucho’s palace/chamber/White House/whatever. The brothers begin a side-splitting game of one-upsmanship with the neighboring lemonade salesman, culminating in an unbroken shot where all three characters trade hats with split-second accuracy that comes off as hilarious confusion onscreen.

Oh, and Zeppo is there too.

The film seems to be attempting to send up politics of some kind, but it’s beyond me what exactly they were pointing and laughing at. Most of their political jabs are wide, easy and not too on target. More than likely the filmmakers waved this goldmine of comic potential away and instead decided to embrace more classic targets. They probably did this because it was the Great Depression and they figured that audiences didn’t need to be reminded of their politicians’ incompetence, but then one has to wonder why exactly they didn’t bridge their jokes on a more classical plotline. Ah well, their awkward political jokes do contain one diamond in the rough, where Harpo continues switching his army uniform in every subsequent shot (first a union uniform, then a confederate, then a French army uniform, etc.).

The musical numbers are wince-inducing. Why were they even necessary? Perhaps padding to get to film (clocking in at barely 70 minutes) long enough to be an A-picture. They cross a line where over-the-top becomes painfully unfunny because you’ve been winked at so many times you think the creators have a tick and can’t stop doing it. They often don’t involve the Brothers, and when they do it’s one of the rare moments when their comedy belly-flops. There’s a small moment two thirds of the way into the movie where Harpo uses the strings in a piano to pretend to play a harp. That’s all this movie needed. Really. In one of Bob Hope and Bing Crosby’s “Road” pictures, Hope breaks the fourth wall to tell the audience they should feel free to go get popcorn because Crosby is about to do a musical number. That’s the best advice I can give you concerning “Duck Soup.”

Ah, but when the movie points its camera at the Brothers, it can be so very funny. The mirror scene between Groucho and Harpo (dressed at Groucho) is probably one of the most perfect comedy sequences ever filmed. There is no music or sound (not even footsteps) to lead the audience, simply the brothers facing off (literally) with one another and trying to out-do each other’s perfect impersonation. Then Chico accidentally walks in on the gag and it’s impossible not to laugh hysterically.

Yet, as a film, “Duck Soup” is virtually interchangeable with the rest of the Marx Brothers canon. You remember certain moments and perhaps a sliver of how the guys got themselves in those moments, but nothing else. I would prefer a just a bit more of a plot, which is probably why I like the aforementioned “Road” movies more than this series of films. In the best of those films, like “The Road to Morocco” or “The Road to Utopia,” the plots not only act as a clothesline for the gags, but add an extra layer of hilarity because of their cheeky coherence. Here we don’t have that.

Despite this, I still want to share a cigar with the Brothers and seek out some of their other work (I won’t have to look too far, “A Night at the Opera” is also on AFI’s Top 100). Actually, I’d just pay to see the men doing a vaudeville comedy routine for two hours and just ditch the costumes and excuses for a plot. “Duck Soup” is both near perfect and a complete disaster, and I’m pretty sure that’s exactly what it was meant to be.