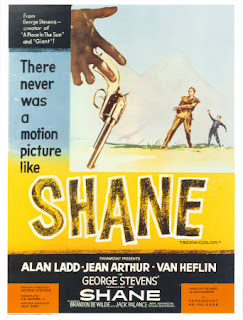 How odd everything in “Shane” feels. It’s almost as if the classic tropes of the Western genre were purposely warped just enough to feel different but not enough to depart completely from our expectations. From the setting to the casting to the script to the direction—everything just isn’t quite right. And in most cases, that is not a bad thing.

Tell me if you’ve heard this one before. A mysterious man with a foggy past appears one day and must stand up against overwhelming odds to right a terrible injustice. In “Shane” the mysterious man is the title character (Alan Ladd), who becomes involved with a family of homesteaders in danger of being forced off their property by an enigmatic cattle baron. The man of the house (Van Heflin) strikes up a quick friendship with Shane that will be, of course, tested. The woman (Jean Arthur) finds herself attracted to the stranger, just as he is to her, and yet both know neither will ever act on those feelings. And then there is the son Joey, who quickly comes to adore Shane as much as he does his father.

But Shane isn’t quite the gunslinger you’d expect. He’s shorter than what we think our hero should, with hair that stays in place even after his big fight scenes and a shirt of bright blue. He orders a soda pop at the bar instead of whiskey. You get the feeling that John Wayne could probably down him with his pinkie. And the Woman might be secretly developing feelings for Shane during the film, but the most they are ever exposed is during an innocent dance between the two that is watched by her husband. A lesser movie would quickly set up a triangle between the Ladd, Arthur and Heflin and end the film with Heflin sacrificing himself, leaving Arthur and Ladd to have their happy ending. “Shane” is not that movie. At all.

Instead Ladd develops a fascinating friendship with Heflin. They bond over getting a huge tree root out of the ground, and if that sounds like an obvious metaphor, you would be right. In the movie’s only prolonged action sequence they team up with one another and fend off eight or ten men, smiling at each other and acting like pigs in shit the entire time. The film finds a reason for the men to come to blows before the climax, but is interested in the reasoning behind the disagreement, not the fisticuffs themselves. Director George Stevens made the conscious decision to not even show most of the battle, instead showing Arthur watching the men from inside the house. And yes, it ends against the upturned tree root, just in case you were wondering if they brought that metaphor back.

The villain these men fight against isn’t your usual man in a black hat, though he is a man and does wear a black hat. His name is Ryker (Emile Meyer…not Jonathan Frakes) and he is given more dimension than your usual Western villain. In fact, he gets his own monologue to explain himself and his actions, and does a fairly good job of convincing us that, while he is a bad man doing worse things, he isn’t a complete douchebag. Mostly, but not completely.

There is, of course, Jack Palance’s character Jack Wilson, who is a gunslinger Ryker has hired to ensure he is successful in his endeavors. Wilson is quite the intimidating presence, only speaking a few lines of dialogue but always being present, especially in scenes where he is not seen but spoken about.

The world these characters inhabit suits them well, because it too is just a little bit off. Time has given an extra layer of depth to the sets and the way the film was shot that helps to underline the just-a-little-offness of the proceedings. Director George Stevens shoots fantastically alive green vistas that are filled with awkward Hollywood sets. We don’t for one second believe that picture-perfect farmhouse could exist anywhere but in a film. Same thing with that Saloon that you could probably build out of Lincoln Logs. It works while still being a constant reminder that we are in a movie…but still, how cool is it to see the natural sunlight peak out from behind the clouds just as a character crosses a street in an important scene?

Despite the artificiality, the film is still able to achieve a great amount of emotional resonance thanks to its avoidance of gun violence expect for one murder and the climax. Shane is trying to get away from the violence that has haunted him throughout his life (this character arc reminded me a lot of the superior “The Quiet Man,” which was not a Western despite starring Wayne and Maureen O’Hara and being directed by John Ford) and does not react when one of Ryker’s heavies throws a drink on his new shirt. You get the feeling that what he can do when given the chance scares him as much as it excites him. Oddly enough, the first time a gun is shot it is when Shane is teaching Joey about how to use a gun, and the scene comes off as touching.

But when a gun is first used against another human being, it’s devastating. Not just that he is shot, but the fact that he is shot in such a humiliating manner and then pathetically falls back into the mud…the moment shattered me as much as the moment where Wayne shot out the Native American’s eyes in “The Searchers.” Though the moment serves as a way to raise the stakes for the heroes, “Shane” gives the death much more weight than the usual Western by exploring the toll the death takes on the character’s loved ones. We see the discussion of the funeral and the funeral itself, which are moments any other Western might easily dispose of.

One thing that made me pull my hair out was the repeated use of character names. A scene doesn’t go by without every character saying the other character’s name at least a dozen time. “Shane, what do you think about that, Shane?” “Joe, I dunno Joe, what do you think?” “Shane, I think whatever you think.” Jack Sher is listed in the credits as supplying additional dialogue, and I have a funny feeling all he did was insert character names in every line then collect his paycheck.

“Shane” isn’t my favorite Western, and doesn’t redefine the genre in the same way “The Searchers,” “High Noon” or “Rio Grande” did. And yet not every classic film needs to change the rules or break them. Sometimes just blurring them is enough.